﻿Mary Helen in front of the Hutong Culture Inn, Beijing.

By the time you read this, my husband John and I will be back in Iowa, our two-week trip to China a thing of the past. Right now, however, while it’s Monday evening back in Iowa, it’s already Tuesday morning in Hong Kong, and I’m writing to you from the future to report that we’ve been having a remarkable time.

Reading to prepare for the trip, I came across a couple of sentences from Invisible Cities, by Italo Calvino, that really hit home:

You take delight not in a city’s seven or seventy wonders, but in the answer it gives to a question of yours. Or the question it asks you, forcing you to answer.

As our flight cruised at 30,000 feet above half-frozen oceans near the top of the world,  I realized exactly what question I hoped China would answer for me, namely:

Why are we here?

My decision to visit Hong Kong and Beijing in June is kind of inexplicable, even to myself. I am not what they call an inveterate traveler. The idea of taking a trip for fun or to see the “seven or seventy wonders” of a place is, well, foreign to me.  I tend to travel for a specific purpose. I’ve taken students to France, taught a writing course in Dublin, traveled with a human rights group to Guatemala, and read my work at a literature festival in Italy. Most often, though, the purpose is to visit family or friends, or to research a writing project, or both.

Why were we here? Was it to visit our friend Judy, who’s teaching in Hong Kong this semester? Why wouldn’t we just wait till she got back to Iowa City and walk over to her house? A bit of Hong Kong in your next book? both my agent and my editor wondered. I was noncommittal, but the answer, I’m pretty sure, is no. Had we come this far to promote my current novel? Reading to the Women in Publishing Society at the famous Hong Kong Foreign Correspondents Club would be cool, but was it 7,789 miles’ worth of cool?

And what about the side trip: four days in Beijing, where you couldn’t count on finding someone who speaks English?  We ran into linguistic trouble right away.  To find our hotel we’d been told to emerge from the subway station at Andingmen and walk south. But which way was south? There was no way to tell at noon on an overcast day. I don’t worry about getting lost because I never know where I am anyway—this is one of the benefits of having no sense of direction—but I sure wished that my “Speak in a Week Chinese” program had taught me the word “south.”

Aided by pantomime and a series of genuinely helpful citizens, we finally found the Hutong Culture Inn, a three-story building deep in a bicycle-choked warren of one-story row houses, many of them built in the 15th century for Ming dynasty officials—minor officials, I’m guessing. Our room had a view of modern solar hot-water tanks installed on venerable tile roofs, many of which had been repaired with corrugated metal and plastic sheets held in place by bricks. We had breakfast in the bar on the third floor, where the Wi-Fi always worked and the walls and ceilings were decorated with vintage posters featuring Chairman Mao. 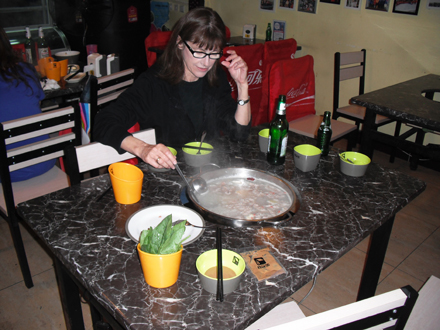 In Beijing, Mary Helen and her husband John ate at a restaurant offering a pot of scalding broth in the center of each table.

On the first night, we walked naively into a restaurant where every table had a big hole in the middle. This was for the hot pot of broth into which the diners plunged their choice of ingredients. Among the meats were bullfrog, fresh aorta, and, we thanked our lucky stars, sliced mutton.  Noting our hesitation, the waiter cheerfully demonstrated how to mix it all in with spinach, sweet potatoes, and noodles, and how to ladle it out without getting scalded.

We saw that waiter in the neighborhood every day after that, usually on his bicycle, and every day he recognized us and said “Hello!” We answered, “Ni hao!”

I had studied a little Mandarin Chinese, which I actually used, much to the good-natured amusement of the locals. When a guy tried to interest us in a bicycle-powered rickshaw ride, I meant to say, “Bu yao,” meaning “I don’t want it,” which is Beijing-ese for “No thanks.” What I said instead was “Ni yao,” meaning, “You want it!” This was true—he did want us to buy a ride—and it made him laugh.  Another useful one-liner was the easy-to-pronounce “Wo bu ming bai!” (“I don’t understand!”) which got a laugh every single time I used it. Just doing my bit for U.S.-China relations. Everybody likes a good laugh.

Three days before June 4th, Tiananmen Square was full of Chinese tourists confronting only the hawkers of hats and souvenirs. In the Forbidden City, we found the Hall of Great Literary Merit and took a picture of me there. We hired a guide and a driver—Kevin and Gao—to take us to the Great Wall. They had a little trouble finding it, actually, so we got an extra scenic tour that took us past tired-looking farmland, a vacation spot called the Fishing Village of Contemplation, and a paintball place.

We returned to Hong Kong after our weekend on the mainland and haggled over shoes and shirts and key rings in various street markets. (You start by offering half the originally quoted price and pass the calculator back and forth until the merchant gives in.) We rode a bus up hairpin turns to “The Peak”—the highest point in Hong Kong—and sat up there to watch until darkness fell and the amazing light show of skyscrapers surrounded the harbor below us. 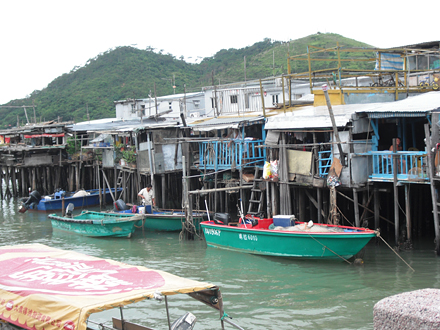 We stood in the peaceful garden of a Buddhist monastery in Kowloon and saw not only the vertical lines of high-rise housing and designer office buildings sprouting up beyond the teak roof, but also the tree-covered mountains the city is built on and into. We crossed the bay on the ferry to Lantau Island, where we found scattered villages, little farms, and large gardens. We took a bus to Tai O, where the old British police station is now a $200-per-night boutique hotel. (No, we did not stay there). A very short walk away, working fishermen and their families still live in a hodgepodge of odd-lot houses, perched on bamboo stilts above the tide.

If you ask me why China, why now, I still can’t explain, but I think the big question—Why are we here?—might have a simple answer: See all of the above.

One more thing. In case you’re planning a trip any time soon, my husband John—you may remember him as the happy traveler?—has some free advice for you. In the subway, when you see those signs on the escalators that tell you to Hold The Handrail, obey them. If you lose your balance, the grooves on the edges of the moving steps can produce scratches that will make you look like you’ve been in a fight with a tiger. Guess how he knows.