The Rumble in the Air-Conditioned Auditorium
Saturday, 7 pm (www.TheRumble2012.com)

Much like Barack Obama and Mitt Romney, cable hosts Jon Stewart and Bill O’Reilly have been lobbing hand grenades into each other’s camps during the presidential campaign. And much like Obama and Romney, Comedy Central’s Stewart now comes face to face with Fox News’ O’Reilly in a televised debate. But there’s a difference between the two showdowns: You probably wouldn’t pay a dime to see Obama vs. Romney, but you’d happily shell out $4.95 to see Stewart vs. O’Reilly. Their debate will be fun, not just a list of predictable talking points.

The pay-per-view, Internet-only Rumble in the Air-Conditioned Auditorium will be moderated by CNN news anchor E.D. Hill. Expect Stewart to be even more amazing than usual – though even if he wins, I doubt he’ll get elected president. Dammit. 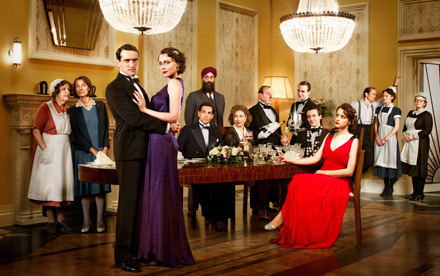 The new season of Masterpiece Classic’s Upstairs Downstairs begins in 1938, with a British radio broadcaster saying, “It is hoped that an agreement can be reached regarding Herr Hitler’s attempt to….”

We all know where this is heading, and we’ve headed there many times before in British drama. But Upstairs Downstairs does a marvelous job of balancing the domestic sphere and the geopolitical sphere in the pre-war period, to the point where the miniseries could easily be retitled Inside Outside.

At 165 Eaton Place, the servants still scramble when the bell rings, and the masters retain their aristocratic bearing. When the world shifts beneath England’s feet, however, the social relations shift as well. Masters and servants must work together to fight the Germans, since poison gas doesn’t really respect class distinctions.

“We come and go through different doors, and we eat our meals at different tables,” says Lady Agnes (Keeley Hawes). “But we all give 165 Eaton Place as our address. That means we are on the same side.”

Maybe England does have a chance of beating this Herr Hitler after all.

Where to set your would-be kooky new sitcom? How about an animal hospital, run by a doctor (Justin Kirk) who dresses his pet monkey in scrubs? And staffed by nut jobs who get wrapped up in boa constrictors?

Yes, Animal Practice strains pretty hard for its kookiness. You don’t find yourself laughing, nor do you find yourself drawn to Kirk’s arrogant George Coleman. George spends entire episodes disparaging pet owners who don’t meet his high standards for primate behavior. “I’m not a fan of most people,” he says.

In recent Sherlock Holmes adaptations, Robert Downey Jr. and Benedict Cumberbatch have proven that Arthur Conan Doyle’s detective can be creatively updated. But CBS’s new drama reminds you how dull Holmes can be. Elementary tries to hook us with a high concept: Holmes (Jonny Lee Miller) is a modern-day Brit in New York City, where he’s recovering from drug addiction. Sidekick Mr. Watson is now Ms. Watson (Lucy Liu), his rehab counselor.

Elementary fails to rethink Holmes from the inside out, as the Cumberbatch version does. It also lacks the humor of the Downey version, with no sparks between Miller and Liu. No, this is your basic police procedural with a quirky hero, though here the quirks are predictable, 125-year-old ones. There’s little thrill in watching Sherlock slog through his deduction routine, duly amazing the dimwitted police.

Miller merely plays at being an arrogant genius, rather than incarnating one. “Sometimes I hate it when I’m right,” he sniffs.

Elementary makes you hate it, too.

This TV adaptation of the 1989 movie features an all-star African American cast. Can Queen Latifah, Alfre Woodard and Phylicia Rashad do anything with this material that Julia Roberts, Shirley MacLaine and Sally Field couldn’t?

No, they can’t. And now we have definitive proof that the Steel Magnolias script can crush any actor, no matter how talented. They only embarrass themselves in this story of small-town Southern women who gossip and giggle in a beauty salon while waiting for a blushing young bride to keel over from terminal illness.

Can someone please revoke this script’s dramatic license?