On Emily Owens, M.D. (Tuesday, 8 p.m., CW), Mamie Gummer plays a young doctor just starting out at a Denver hospital. Emily still bears the scars of being a high school nerd, and she’s dismayed to learn that hospitals are the grownup equivalent of high school. There are the cute guys who don’t notice you, the mean girls out to get you, and the hundreds of others judging your every move. An interior monologue puts us in Emily’s head as she constantly reminds herself, “Don’t spazz out!”

In other words, Emily is the shy-yet-beautiful, anxious-yet-competent heroine familiar from many career-woman series. But there’s a difference here: Mamie Gummer. Meryl Streep’s kid has inherited the family talent, with a face that can express 1,001 shades of fear, sympathy, regret, intelligence and self-loathing. She makes Emily’s insecurity feel real, touching the 16-year-old misfit in all of us.

The above-average script gives Emily plenty of bad qualities, as if daring Gummer to be likable. Somehow, she is. Let’s enjoy this amazing actress on series TV before some movie producer turns her into…well, the next Meryl Streep.

“You must think I’m incredibly self-absorbed,” Emily babbles to a handsome doctor.

I couldn’t have put it better myself. 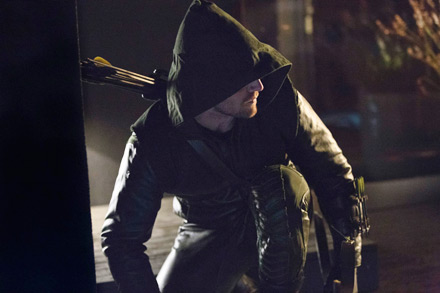 Oliver Queen (Stephen Amell) is a fun-loving millionaire playboy who doesn’t care about anyone but himself. Then he gets shipwrecked on a mysterious island for five years and transforms into a humorless superhero, returning home to serve justice with a bow and arrow.

This new series is a copy of the Dark Knight movies, but you can’t get on Arrow’s side the way you do on Batman’s. Oliver is a big, earnest drag when he changes into his green hoodie. Plus, the fact that he’s defined by his weapon makes him very difficult to like. Where Batman prefers non-lethal solutions to crime, Arrow just starts shooting. At the end of a fight, his opponents are scattered on the ground with arrows sticking out of their chests. In other words, they’re executed without benefit of due process. I’d say that puts Arrow in the serial-killer category.

It’s not a good sign when you find yourself wishing that the humorless superhero would transform back into the fun-loving millionaire playboy.

Every prime-time soap opera wallows in melodrama, but few get it right. Nashville, set in the country-music capital, has a plot so juicy you could imagine Carrie Underwood singing it. The series is a twangy variation on All About Eve, as aging country superstar Rayna (Connie Britton) watches the rise of a young rival (Hayden Panettiere) who steals not only her spotlight, but also most of the men in her life. The subplots are a big part of the fun, involving Rayna’s evil father (Powers Boothe), her weak husband (Eric Close) and her lovelorn lead guitarist (Charles Esten).

Connie Britton helps make Nashville something special, just as she did with Friday Night Lights. Rayna could have easily been a cartoon diva, but Britton brings nuance to the role. She makes you feel that there’s something at stake as Rayna resists selling out to her father and her music label – and that “something” is the state of her soul. “I cannot be bought!” she insists.

I wouldn’t be so sure about that. Nashville is taking Rayna down a rocky road, and I can’t wait to see where it leads. 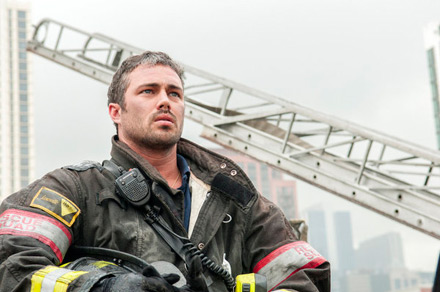 The generic title lets you know exactly what you’re getting into with this new drama. Windy City firefighters tease, support and clash with each other while waiting for the next emergency. We get the seen-it-all veteran (David Eigenberg), the wide-eyed rookie (Charlie Barnett) and the no-nonsense chief (Eamonn Walker). The hunky guys walk around the locker room half-dressed, while female squad members show up for assignations in the shower.

But wait! Despite its familiarity, Chicago Fire works. The tone is naturalistic rather than melodramatic. The firehouse camaraderie rings true, thanks to the strong cast and script. And the rescue scenes are downright thrilling, laying out the mechanics of saving a building. 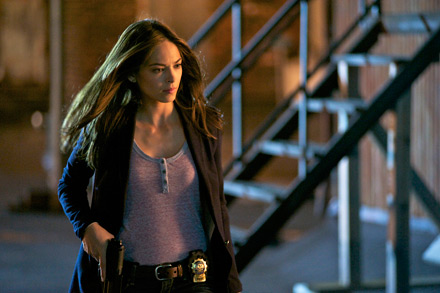 In this earnest new drama, detective Catherine Chandler (Kristin Kreuk) teams up with a former doctor (Jay Ryan) who occasionally turns into a snarling monster. Both of them are dedicated to solving crimes, so why not form a beauty-and-the-beast partnership?

The fairy-tale context is supposed to make us forgive the silly premise, but Beauty and the Beast gets so silly that even the Grimm loophole can’t excuse it. It’s hard not to be distracted by the fact that everyone on the police force looks like a Vogue model, including the coroner. And though Catherine is presented as a brilliant detective, she’s prone to running into subway tunnels with no plan for when the train comes around the corner to flatten her.

I think Beauty and the Beast is headed down that same subway tunnel, metaphorically speaking.

Spy vs. Spy vs. Spy: Hunted | You Can't Trust Anyone in the Brilliant Thriller Hunted