Forget the overrated Homeland. If you’re looking for an international spy thriller on premium cable, Hunted (Friday, 9 p.m., Cinemax) is the one to watch. The pilot messes with your head so skillfully that you’re woozy by the 30-minute mark. And thoroughly intrigued.

It takes a while, but you come to see that Sam Hunter (Melissa George) is an operative for a shadowy private company specializing in espionage. In the middle of setting up a mark, she’s set up herself, possibly by the colleague she’s in love with. She’s left for dead but mysteriously returns to work a year later, not knowing whom trust. They don’t trust her anymore, either—nor should they.

George is model-beautiful, but also believable as a bad-ass who can dispatch several beefy opponents at once. For all the thrilling action, though, Hunted is most notable for George’s ability to pull you into Sam’s private pain. She’s damaged goods, and the production evokes her state of mind with fragmented imagery and disorienting music. The arty filmmaking presents a wonderful paradox: It keeps you glued to the screen even as you wonder, “What is this thing?” 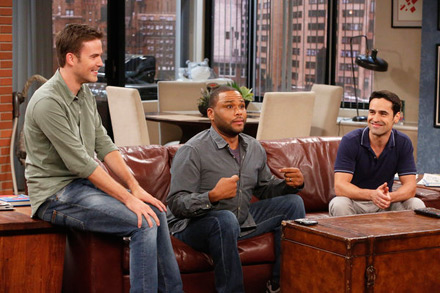 Zach Cregger as Nick, Anthony Anderson as Gary, and Jesse Bradford as Chris in Guys with Kids. (Photo: Vivian Zink/NBC)

The title says it all: Three guys  (Anthony Anderson, Jesse Bradford, Zach Cregger)
raise their kids, with help from wives, ex-wives, and each other. The series whips up a nice sense of panic, as the young parents slowly go mad from their new responsibilities. Expect no peace for 30 minutes.

I admit the premise is ancient, but the sharp script makes Guys with Kids feel contemporary. Amazingly, it does so without resorting to the mindless raunchiness that passes for cutting edge on many new sitcoms. The cast has chemistry galore—and with so many kids and parents running around, the comic possibilities are endless. 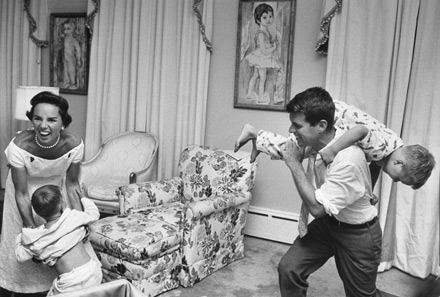 There are times when you want to dig into Kennedy history to examine the Democratic dynasty’s more unsavory aspects. And there are other times when you just want to wallow in their best qualities of leadership and empathy. Ethel, directed by Robert F. Kennedy’s daughter Rory, provides a fabulous opportunity for wallowing. 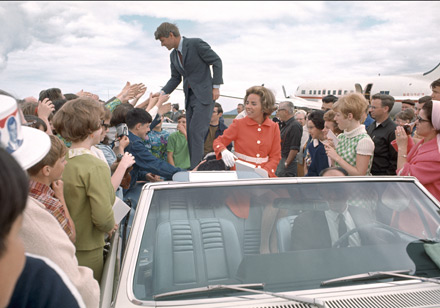 No one can blame Rory (born after her father’s 1968 assassination) for emphasizing the best sides of RFK, including his relationship with her 10 siblings and her mother, Ethel. In interviews with Rory, this thoughtful, playful, likable clan paints a portrait of an extraordinary man, concerned with the plight of workers, poor folks, people of color, and soldiers in Vietnam. Even a hardhearted journalist like me is susceptible to the documentary’s poignant footage: Bobby playing touch football with the kids, comforting a crowd after Martin Luther King’s death, communing with the most downtrodden American citizens. 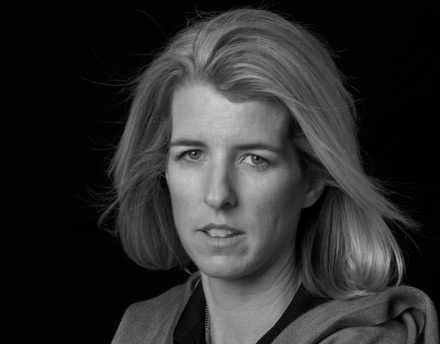 Frankly, I was a wreck as the chronology moved closer to the murder. The screen goes black, and Ethel—who had been the picture of strength and eloquence in her interviews with Rory— simply says, “Let’s talk about something else.”

I agree. Can we just watch the touch-football scenes again? (And again?)


Werner Herzog’s Into the Abyss: A Tale of Life, A Tale of Death
Tuesday, 7 pm (Investigation Discovery)

After seeing so many glib, sensationalistic crime stories on TV, I’m impressed by Werner Herzog’s documentary about a triple homicide in Texas. He conducts a profound In Cold Blood-style investigation into the lives of Jason Burkett and Michael James Perry, teenagers who left a trail of bodies during a stupid car heist.

Herzog (Grizzly Man, Cave of Forgotten Dreams) is not into titillation. He’s interested in the mystery of life. That may sound overblown, but believe me, he’ll get you interested, too. How do people like Burkett and Perry come to be? Herzog’s probing interviews bring you close to the answer – “He had trash for a father,” admits Burkett’s father—but ultimately leave you pondering the strangeness of the human animal.

Charles Barth: A New Kind of Superhero | Reimagining Superheroes Through the Lens of Mexican Culture