Charles Barth, the 30-year faculty member at Mercy University, is being honored with his first solo exhibit since 1991 at the Cedar Rapids Museum of Art, through January 5, 2013. The exhibit coincides with a major monograph of his work called Charles Barth: A Kaleidoscope of Culture.

Upon first viewing artwork by the painter and master printmaker Charles Barth, my immediate thought was that he must be a dead artist. Not true! Charles Barth is not only alive, he lives in two places—Cedar Rapids, Iowa, and Oaxaca, Mexico. His artwork is a treasure of both cities. Barth’s work offers a first-take impression of Mexican traditional folk painting—the same folk art that influenced the eminent Mexican artist Frida Kahlo. It then became clear that there was more to the artist’s work—much more.

Barth considers November 2nd a special day—the Day of the Dead in Mexican culture. Mexican families honor the memory of their departed loved ones by decorating cemetery graves and creating altars in their homes. The artist appreciates the “humor, affection, and charm” exhibited in these artistic altars, which include the favorite foods and treats of the departed. These essential qualities are also revealed throughout the colors and intricately woven compositions of Barth’s paintings and intaglio prints.

Oaxaca has been home for eight months out of each year for Barth and his wife since 1997. After giving a printmaking workshop there in June 1996, the couple found themselves delightedly immersed in  Mexican culture and decided to make a home there. Their beautiful wood, tile, and white masonry home is warm, simple, and elegantly artistic. A kind of monument to the Mexican muralist Diego Rivera and his wife, Frida Kahlo, called Diego and Frida’s Gym is displayed at their home. The piece is a collage depicting the artist couple as athlete, model, and bodybuilder superheroes. 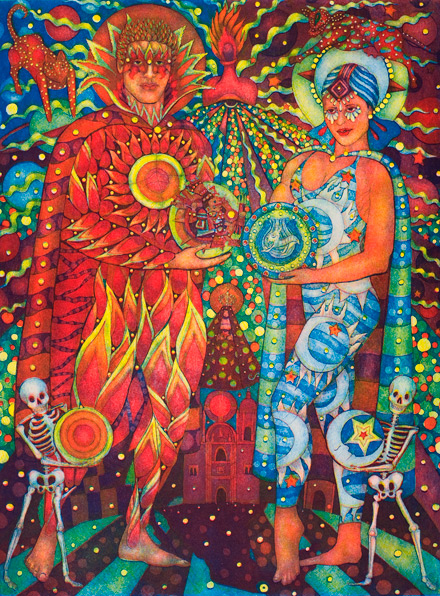 Barth explains his interest in depicting this sort of iconic super-character in his work: “The wrestling stars of lucha libre are the figures that many Mexican children as well as adults admire intensely. I especially refer to El Santo in my art work because he is probably the most famous of all luchadors. Superheroes are a popular art form today and bodybuilders represent superheroes in ‘live’ form.”

Charles Barth first paid a visit to Mexico in 1980. He recalls that he became deeply enchanted by the country, its people, and their traditional arts and crafts: “Mexico’s traditions dating back to the pre-conquest have fascinated me. These unfaltering traditions have become the basis of my art. . . . I travel throughout Mexico often to observe and record culture.”

The cultural tapestry of Charles Barth’s artwork reminds viewers of the innocent playfulness, wonder, and pleasure we experience as children. The paintings depict an odd family portrait of pop culture characters, who despite their diversity blend at the soul. Barth holds nothing back, creating a rich visual experience that fills the eyes and heart. Perhaps Barth’s only request of us is that we remember the magic of our inner child.

“Charles Barth: A Kaleidoscope of Culture” runs through January 5, 2013at the Cedar Rapids Museum of Art.

Spy vs. Spy vs. Spy: Hunted | You Can't Trust Anyone in the Brilliant Thriller Hunted

The Perks of Being a Wallflower | You Gotta Have Friends