The Carrie Diaries (Monday, 7 p.m., CW) is a prequel to Sex and the City, featuring a 16-year-old Carrie Bradshaw (AnnaSophia Robb) in place of Sarah Jessica Parker’s adult version. In 1984, Carrie obsesses on “finding her voice as a writer” as she discovers makeup, boys and haute couture in her first Manhattan job. The new series trades the naughty brilliance of HBO’s classic comedy for earnest teen-drama clichés, and I was just about to leave it to the 13-year-olds when it hooked me with worse-than-usual missteps. In other words, The Carrie Diaries is that rarest of TV pleasures: a show that’s so bad it’s good.

Start with the wild swings from ultra-wholesome to ultra-raunchy, as if the filmmakers couldn’t get a handle on their tone. Then there’s the preposterous evocation of hip Manhattan life, along with the equally preposterous evocation of square suburban life. Best of all, there’s Carrie’s narration. Even the simple act of getting into a cab spurs an overheated groaner: “I wondered where this golden chariot would take me!”

Don’t try to stop me – I’m boarding this golden chariot myself, for as long as The Carrie Diaries lasts. 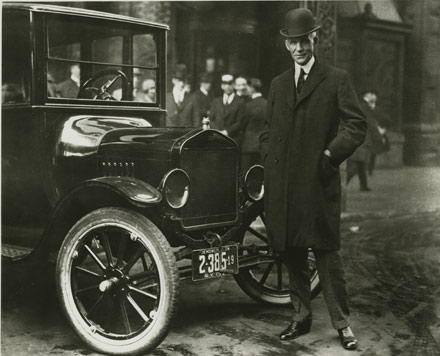 In school, many of us learned that Henry Ford was a great American, having pioneered the affordable car and the assembly line. But no one will sing his praises after seeing this week’s cringe-inducing American Experience documentary.

We learn that Ford was a tyrant who spied on his workers and had them beaten up at the mere suspicion of union organizing. He took a similarly brutal approach to his own son, driving him to an early grave. He blamed all the world’s problems on the Jews – and not just in his drawing room, but in a national crusade waged through his influential newspaper. Most surprising of all, he made colossally bad business decisions, sticking with his Model T long after the country had moved on to competitors’ more innovative cars.

The documentary leaves Ford’s reputation in tatters. And if he were alive, he’d surely blame it all on the Jews.

Those who enjoy TV series about half-naked Roman slaves wreaking gory vengeance on their toga-clad masters while reciting faux-Shakespearean dialogue with perfect elocution – well, you guys are kind of a weird demographic. But you clearly exist, to judge from the third season of Spartacus. Here you will find all the slow-motion beheadings, graphic sex, stringy hair, rearing horses and oily muscles you’ve become accustomed to.

The fascinating thing about Spartacus is that, for all the pulpy action, the script strains to sound high-toned. Thus, no slave would just ask, “Is she still alive?” He would ask, “She yet draws breath?” And no mother would just say that her son is “too excited to sleep.” She would say that “the battle rages in his head, vanquishing slumber.”

Whatever think about Spartacus: War of the Damned, you have to admit that it does vanquish slumber.

I admit that I’ve rolled my eyes more than once at the relentlessly elegant portrayal of England’s past on PBS’s Masterpiece, where every country estate is lit by a glistening chandelier. Ripper Street, from BBC America, offers an alternative portrait. The series is set in London’s gritty East End in 1889, during Jack the Ripper’s murder spree. As detectives try to solve the case, we’re treated to some of the most brutal images I’ve ever seen on TV, including the bodies of the Ripper’s prostitute victims.

Larry Hagman was the only reason to watch Dallas, that bland 1970s-90s soap opera set in Texas oil country. He’s also been the only reason to watch the reboot, in which he reprises his role as the villainous JR Ewing. Sadly, Hagman died during filming last fall, and Dallas deserves to die with him. The series’ junior villain – John Ross (Josh Henderson), JR’s conniving son – has none of Hagman’s screen presence. He’s a lightweight pretty boy who just looks pathetic in the role of the heavy. In the season premiere, a femme fatale falls into John Ross’ clutches, cooing, “Ooh, you’re trouble!”

Hagman appears in the episode, and it’s worth braving the labored melodrama just to hear his insinuating line readings one more time.

Silver Linings Playbook | Rebuilding a Life When Everything Goes Awry