Well, it was bound to happen eventually. John McClane and his shtick have finally run out of gas. That’s really about all there is to say after watching the disjointed, paper-thin mess that is A Good Day to Die Hard. But let’s take a look at the stats anyway, shall we?

Bruce Willis once again stars as America’s favorite New York City cop who can’t seem to stay out of trouble’s way. This time, he is on a “vacation” to Russia where it is rumored that his no-good son, Jack (Jai Courtney)—whom McClane has barely spoken to in recent years—has been located after John had a fellow cop do some digging to discover his son’s whereabouts. Despite his tough guy exterior, John is still Jack’s father and, once he learns that Jack can be found at a Russian courthouse where he is being transported for trial, John hops a jet to go save the day. 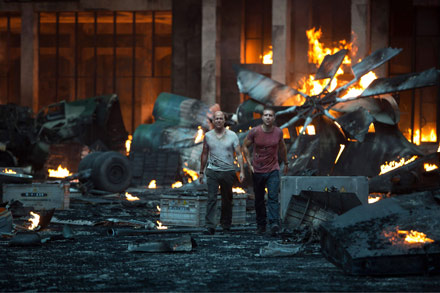 John McClane (Bruce Willis) and his son Jack (Jai Courtney)survey the wreckage after an encounter with a band of assassins in A Good Day to Die Hard. (© 2013 Twentieth Century Fox Film Corp.)

But since this is Russia—and since this is the Die Hard franchise—it’s not that simple. John arrives at the courthouse just in time to see the building get attacked and he bumps into a suddenly-free Jack who is fleeing the scene with an unidentified man who, like Jack, is in chains. Despite his shock and dismay at seeing his father turn up out of the blue, Jack tries to dissuade John from following him, but when a bunch of Russian suits suddenly open fire on them in broad daylight, all bets are off and the action begins.

The long and the short of this 100-minute flick is that a nifty, yet very lengthy, chase sequence ensues, things go boom, we learn that there is a plot to weaponize uranium that is being housed in Chernobyl, and many people are not who they seem. Along the way, John grows a conscience and laments not being there for his son while he was off trying to save the world all the time, but in the next scene can be found spouting off more of the insensitive, I’m-an-American-so-I-am-awesome-and-you-Russians-can-suck-it dialogue that was thought to have died about two decades ago. 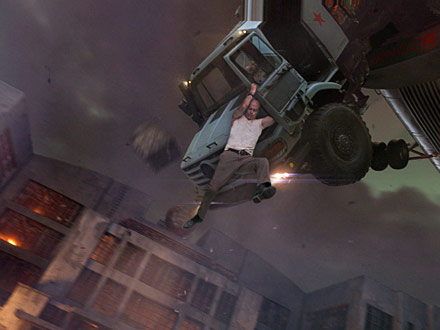 How does he do it? John McClane (Bruce Willis) survivesa fall in A Good Day to Die Hard. (© 2013 Twentieth Century Fox Film Corp.)

The characters are tired, the dialogue is forced, repetitive and painful to listen to (when you can understand it, that is), and the movie’s references to other entries in the series get so overblown that one character meets an untimely death in a manner that fans of the original will no doubt make comparisons to. There is homage and then there is just plain laziness, and this detail falls into the latter category. Skip Woods has written such a dated, simplistic film that it’s a wonder it ever got greenlit in the first place. Willis does what he can to make the film a decent ride, but he isn’t given much to work with so it’s a tough sell for the audience.

There is plenty of adrenaline coursing through this flick’s veins and action junkies will certainly have their fill of popcorn fun (the explosive denouement, for example, provides a surprisingly funny moment while the McClanes jump out of a building), but this film seriously needed cameos from Mel Gibson and Danny Glover so they could tell Bruce Willis that he’s getting too old for this…well, you know the rest.