Golden Boy (Tuesday, 9 p.m., CBS) is a new cop drama that takes an original approach to its protagonist. Walter Clark (Theo James) is not only a smart, capable police officer with a vulnerable streak (nothing new there), but an opportunist. He has a lean, hungry look, watching for the main chance at all times. That’s not necessarily an attractive quality.

Indeed, Golden Boy has the guts to make Walter a complicated young man. He grew up as a street kid, and he’s still not shy about cutting corners to get what he wants. His partner (Chi McBride) and fellow officers are unsettled by the showboat in their midst, and they take pains to put him in his place. That gives Golden Boy a chance to explore police-office politics rather than just cracking cases.

“Inside every man there are two dogs fighting,” Walter’s partner tells him. “One’s good, one’s evil. You know who wins? The one you feed the most.”

To Golden Boy’s credit, the pilot doesn’t indicate which of Walter’s dogs will ultimately win. 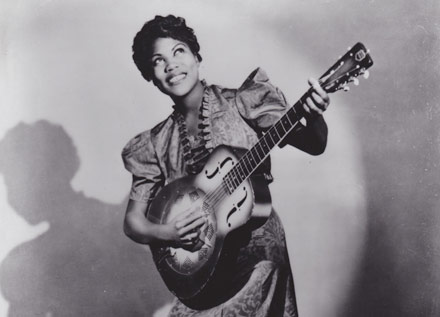 Sister Rosetta Tharpe at the age of 23 (photo: Courtesy of Schomburg Centre for Research in Black Culture/James J. Kriegsman)

A portrait of the mid-century gospel singer Sister Rosetta Tharpe dubs her “The Godmother of Rock and Roll.” If that sounds like a stretch, wait until you see the archival clips, in which Sister Rosetta plays twangy Chuck Berry-style electric guitar before Berry himself ever did. Her gutsy singing also influenced Bob Dylan, who called her “a powerful force of nature.” 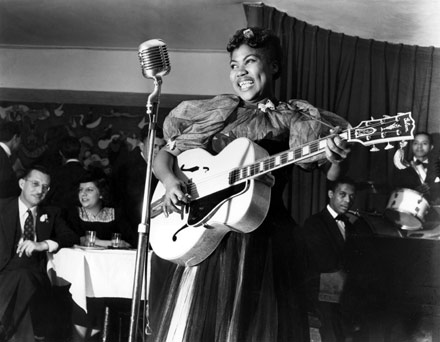 Amen. In her day, Sister Rosetta was a star in both pop and gospel, helping break down the barriers between the secular and the sacred. According to one commentator, her early gospel hit “Rock Me” sounds like “an invitation, and not to the altar.” Truly, for all her devotion to the Lord, Sister Rosetta had a rebellious streak, and she became gospel music’s first superstar on her own terms.

The documentary’s highlight is a clip of Sister Rosetta in her last recorded appearance, shortly before her death in 1973. Ailing and depressed, she sings “Precious Lord, Take My Hand” with a combination of hope and despair that evokes the sublimity of the human soul. If the performance doesn’t make your knees go weak, you’re made of sterner stuff than I am. 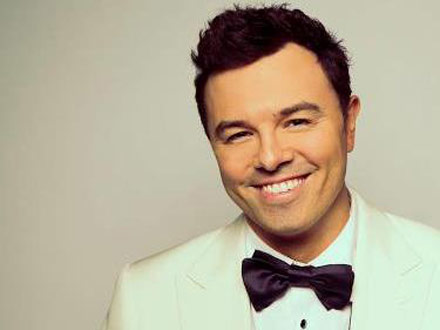 January’s Golden Globes achieved awards-ceremony perfection: comic-genius hosts (Tina Fey and Amy Poehler), daringly eccentric presenters (Kristen Wiig and Will Ferrell), and loopy recipients who got people talking for days (Jodie Foster). There’s no way the Oscars can compete with that, given their insistence on handing out all those technical awards that only industry insiders care about. The choice of Family Guy’s Seth MacFarlane as host looks like a desperate stab for edginess, but he does offer reason for hope, especially after his strong performance hosting Saturday Night Live last fall.

I find several of the Best Picture candidates overrated. There’s one, and only one, that I’m pulling for, which is why I’ll wear a stovepipe hat during the broadcast.

This new reality series would appeal to anyone interested in the mysteries of car sales, not to mention the mysteries of human psychology. It stars Tom Stuker, a legendary “closer” who’s brought in to turn around failing dealerships. Tuker is a brash, no-nonsense bad-ass in a black cowboy hat (a white one really wouldn’t be appropriate) who works his magic over the course of a week, then moves on. He shows employees how to sell anything to anybody.

Why hasn’t President Obama hired this guy to negotiate with Congress? Tuker would not only broker deals with Republicans, but send each of them away with a fully loaded Ford Taurus. 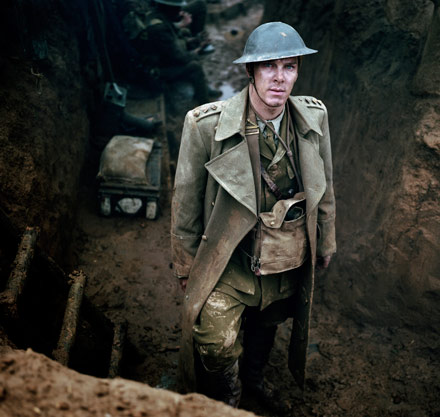 This TV movie, set in World War I-era England, is perfectly timed for those in withdrawal from the “Downton Abbey” season finale last week. Here you will find all the lovely estates, extravagant gowns, and quaint Edwardian values you’ve been missing. What you won’t find is a cast of characters to fall in love with.

The adaptation of Ford Maddox Ford’s novels struggles to make us care about the ramrod-stiff aristocrat (Benedict Cumberbatch) who marries a nasty narcissist (Rebecca Hall), then falls in love with a drippy suffragette (Adelaide Clemens) before The War Changes Everything. In part one, you feel sorry that Cumberbatch has to clench his jaw so tightly. He’s no fun to be around, and the 1910s British politics and codes of conduct feel terribly remote.

Then again, I appreciate the production’s ambition, and I’m hoping subsequent episodes are more exciting. I don’t usually welcome the onset of World War I, but it might be just the calamity Parade’s End needs.