John Jorgenson fell in love with gypsy jazz and formed his own quintet to perform it.

Musician John  Jorgenson has enjoyed a magnificent career. Back in the ’80s, the Madison, Wisconsin, native helped found the Desert Rose Band and won the Academy of Country Music’s “Guitarist of the Year” award three consecutive years. Jorgenson since has toured and recorded with such luminaries as Bob Dylan, Bob Seger, Willie Nelson, Johnny Cash, Emmylou Harris, Barbra Streisand, Luciano Pavarotti, Roy Orbison, and Bonnie Raitt—not to mention a six-year gig in the ’90s with Elton John. In 2008, he won a Grammy award in the Best Country Instrumental Performance category for his performance on Brad Paisley’s “Cluster Pluck.”

However, the artist’s greatest love is gypsy jazz. Jorgenson formed his own ensemble to perform this music, the John Jorgenson Quintet, which features himself on lead guitar, Doug Martin on rhythm guitar, Jason Anick on violin, Simon Planting on bass, and Rick Reed on percussion. The combo will perform at CSPS in Cedar Rapids on Sunday, February 24. This will mark the second time in two years the quintet has played CSPS.

“I remember the venue well in a positive way,” Jorgenson said over the telephone from Nashville. “I love old spaces like that one because it feels like they are inhabited by energy of past performances.” He also remembered the Iowa cold and asked about the temperature. The John Jorgenson Quintet may play “Le Jazz Hot,” but the members come from warmer climes. 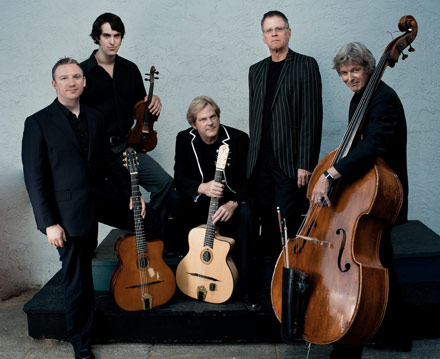 The John Jorgenson Quintet returns to CSPS in Cedar Rapids to perform on February 24, 2013.

While Jorgenson was born in Wisconsin, his family (both his mother and father were professional musicians) moved to southern California when he was still a boy. “I grew up studying classical music at school and playing in a rock and roll band on the side,” he said. “I needed money, so I took a job at Disneyland playing bluegrass and Dixieland. The more I learned about traditional jazz, the more in love with it I fell. When I discovered the music of Django Reinhardt, it just blew me away. I could not get enough of it.” He jokingly credits Disneyland with his transformation from boy to man.

Jorgenson continued researching gypsy jazz music and said he spent a lot of time raiding crates and looking for record albums in the ’70s and ’80s. “Even when I was playing with the Desert Rose Band or performing around the world with Elton John, I would sneak out on tour and search for the music. If it wasn’t for the Internet, I might still be looking for it today.”

But the Internet did change things for Jorgenson. By the early 21st century, online networking help launch gypsy jazz fests, whose popularity then exploded. “I would say now there is probably at least one gypsy jazz band in every town in almost every country in the world,” he said. “There are scenes everywhere from Chicago to Tokyo, Argentina to Japan.”

He said that movies have exposed new audiences to the music. Jorgenson himself portrayed the character of Django Reinhardt in Head in the Clouds with Charlize Theron and Penelope Cruz. Johnny Depp played a gypsy jazz guitarist in Chocolat. Sean Penn got an Oscar for his role as a jazz guitarist in Woody Allen’s Sweet and Lowdown. And the quintet provided the music for the sci-fi fantasy Gattaca.

“Some people may think it strange to use music of the past for a movie about the future, but it served a definite purpose,” Jorgenson explained. “The film took place in a cold and sterile world. Gypsy jazz is an energetic, romantic, emotional style. The contrast suggested what was missing in life without anyone needing to say it.” Jorgenson noted that the lead instruments of acoustic guitar and violin come off as distinctly human, and the hybrid nature of the sound reveals its universality.

“Gypsy music has emerged in the many places gypsies have lived and the cultures nearby, such as klezmer, flamenco, and Eastern European folk. The jazz elements are rooted in the swing music of Louis Armstrong, Duke Ellington, and other American artists,” Jorgenson said. His aim is to keep the traditional music alive and keep the tradition moving forward.

“I find it kind of kitschy when someone takes a Beatles tune and turns it into a gypsy jazz number, and I hate when people treat the originals like museum pieces that cannot be tampered with,” Jorgenson said. “That’s why I write my own material and mix it with the classical stuff. I respect the old songs, but I live in the present.”

Jorgenson had this advice for listeners: “Do not get too serious about any one thing. Most of everything in one’s life is not fully in our control.” On the other hand, he said, “Be really active and take responsibility for your own life. Try and figure out what inspires you, what your gift is, and figure out a way to make that at least 80 percent of what you do every day.”

Then he added, in a quiet voice to make sure careful attention was paid, “The most important thing audience members should note”—he paused for emphasis—“do not be afraid of either the word ‘gypsy’ or ‘jazz’.” He chuckled and said, “If people can get past labels in life, they will enjoy it more.”