If you love baseball enough that you still view it as America’s pastime, then you will love 42. From the shots of Ebbets Field to references to barnstorming teams and Negro Leagues stalwarts like the Kansas City Monarchs, this movie has much for baseball enthusiasts to enjoy. The story largely succeeds in delving into the first years of Jackie Robinson’s professional baseball career—as a member of the Montreal Royals and then the Brooklyn Dodgers—to create a surprisingly stirring film.

The film starts with legendary Brooklyn Dodgers owner Branch Rickey, who decided baseball needed to break the color barrier and bring African American players into the league. By focusing Rickey’s unpopular decision rather than simply putting Robinson front and center throughout, 42 ends up being more well-rounded than you expect.

At the same time, however, there are moments when Jackie Robinson—played solidly by relative newcomer Chadwick Boseman—doesn’t feel like the star of this movie. You are more likely to remember the hilariously gruff outbursts that Harrison Ford gives as Rickey, or the side-splitting, pitch-perfect performance of John C. McGinley as famed radio broadcaster Red Barber. Is that what you expect from a biopic about Jackie Robinson? But then again this film is called 42 rather than The Jackie Robinson Story, and it only focuses on a few years of his life, so perhaps it is all about perspective. 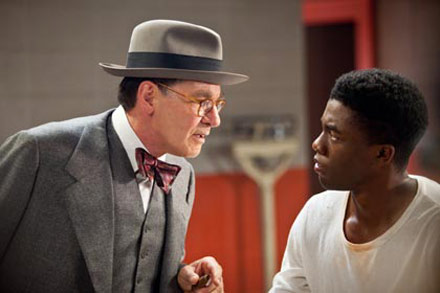 42 also catches your attention with its handling of racism. There are times when characters’ “aha” moments read like something out of a bad Hallmark movie, and the vast majority of the white people here are little more than ignorant caricatures, but Alan Tudyk’s performance as Philadelphia Phillies manager Ben Chapman provides one of the most shocking portrayals of racism seen on film in recent memory. The dreadful names Chapman calls Robinson, not to mention the flood of insensitive comments he makes, will make your skin crawl. It is a credit to Tudyk that his performance makes your blood boil as much as it did Robinson’s, especially since he has spent most of his career playing the role of comic relief.

Aside from a few schmaltzy moments that movies like this seem bound to have, this is a very effective movie. Genuinely moving, 42 is an interesting character study in race relations, contains far more humor than you would expect, and offers some great baseball scenes. This one’s a winner.   B