Dustin Hoffman and Robert Redford talk about their movie All the President’s Men.

You couldn’t ask for a better reevaluation of the Watergate scandal than All the President’s Men Revisited (Sunday, April 21, 8 pm, Discovery). Robert Redford narrates the story of President Richard Nixon’s downfall, drawing on interviews with the journalists who broke the story (Bob Woodward, Carl Bernstein), Nixon henchmen (Alexander Butterfield, John Dean) and media commentators (Rachel Maddow, David Frost). The two-hour production features juicy video and audio from the early ’70s, including snippets from Nixon’s notorious White House tapes. In one Oval Office conversation, shortly after Nixon thugs were caught breaking into Democratic headquarters, an aide smugly assured his boss that nothing would come of a criminal investigation. “It would make a funny goddamn movie,” he said.

The investigation did become a movie—Redford’s All the President’s Men—but it sure wasn’t very funny. Interviewees assess the damage Nixon did to the nation with, as Frost delicately puts it, his “dislocated relationship with the truth.” (Translation: He was a dirty liar.) Maddow notes the irony of a self-described “law-and-order administration” engaging in criminal activity that landed 16 aides in prison.

Only one person onscreen believes Nixon got a raw deal: former speechwriter Ben Stein. “It’s really sad,” Stein blubbers, wiping away tears. “I think he was a saint.” 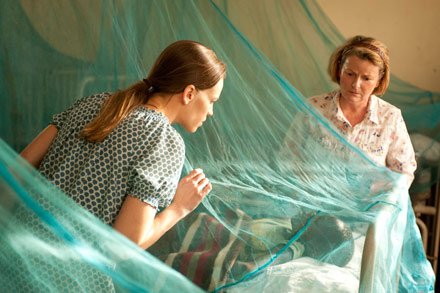 Mary and Martha has all the hallmarks of a Disease of the Week TV movie. Two women (Hilary Swank, Brenda Blethyn) have blissfully happy experiences with their sons for the first 30 minutes, then fall apart when the boys die – here, in South Africa, from malaria. The mothers dedicate themselves to fighting the disease, and the movie turns into an admirable call to action.

“Admirable call to action” and “great drama” are often mutually exclusive, but not in Mary and Martha. Director Philip Noyce attends to pacing and cinematography, and he’s particularly skillful at evoking the fever dream of grief. The script makes time for psychological complexity, daring to portray Swank’s Mary as less than a saint. And Swank, as you’d expect from the star of Boys Don’t Cry, earns her paycheck with another portrait of a woman in extremis.

Mary bears some responsibility for her son’s death, having twisted his arm to homeschool him in Africa. We continue to sympathize with her even as we see that she’s following in the footsteps of her despised father (James Woods), who always put his own desires over those of his family.

Did I say Swank earns her paycheck? For this subtle characterization, she deserves a bonus.

NBC poured massive resources into creating a TV musical and came up with the lumbering Smash. Meanwhile, ABC Family has created a TV-movie musical that’s effortlessly entertaining with a fraction of the budget. Jane Seymour stars as an aging dancer who takes a swig of youth potion without knowing it. “Kinda minty,” she says, just before being magically transformed in mind and body. Now a lithe blond bombshell, she sets out to prove that her daughter’s fiancé is a cad – by seducing him herself.

Unlike Smash, Lovestruck handles heavy emotions with a light touch. The musical numbers sparkle, and the cast members know just how seriously to take the fairy-tale plot—i.e., not very. The production is, to coin a phrase, kinda minty. 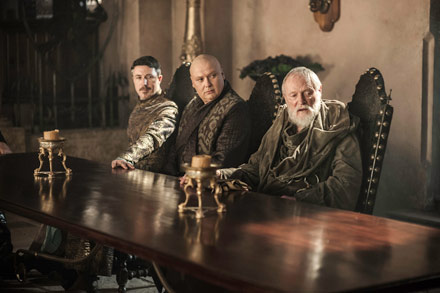 I don’t watch every episode of Game of Thrones, which means I’m lost every time I check in with the sprawling fantasy series. Individual episodes make no attempt to accommodate casual viewers, who can’t tell one power-mad schemer from another as they jostle for the Iron Throne. Yet I’m still able to enjoy this week’s installment, thanks to the brilliant acting, writing, and imagery.

Diana Rigg has joined the cast in season three, and she steals the show as a tart-tongued old woman who consults with Varys (Conleth Hill) over thwarting Littlefinger (Aidan Gillen) from taking over the north. After Varys runs down their convoluted options, Rigg says, “It’s all very obvious, isn’t it?”

Well, no. I didn’t understand their conversation at all. But given the episode’s many other pleasures—including some magnificent fire-breathing dragons—it seems churlish to complain.

The producers of Breaking Bad have created another eccentric crime series with a mysterious figure at its core. As Rectify begins, Daniel Holden (Aden Young) is released from a Georgia prison after 19 years on death row. DNA evidence has undermined his conviction for the rape and murder of a teenage girl when he was a teenager himself. But he’s not off the hook, as the lawmen who brought him to trial believe he’s still guilty. Or maybe they’re just covering for the real perpetrators, who’d like to see Daniel take the fall yet again.

Young makes you feel how disorienting it would be to trade solitary confinement for freedom. His character has the dazed expression of a newborn baby seeing the world for the first time. When his sister asks him if it’s weird being out of prison after so many years, he answers in typically laconic fashion: “It’s not un-weird.”