Threefifty Duo, a Brooklyn-based guitar duo comprised of Brett Parnell and Geremy Schulick will perform on Saturday, April 20, and Boston-based husband-wife duo Matt & Shannon Heaton will perform on Sunday, April 21, in Fairfield at Café Paradiso. Both shows begin at 8 p.m.

Parnell and Schulick formed Threefifty duo while the two were students at the Yale School of Music and established themselves in the club scene of New York City. The pair has earned a reputation for boundary-breaking playing, combining influences ranging from indie-rock to baroque music to create a sound that keeps audiences engaged and often spellbound. Described as “classically influenced post-rock,” the two guitarists are touring in support of their newest album, Collapse.

Threefifty Duo will also be playing on Friday, April 19, at the Washington in Burlington. 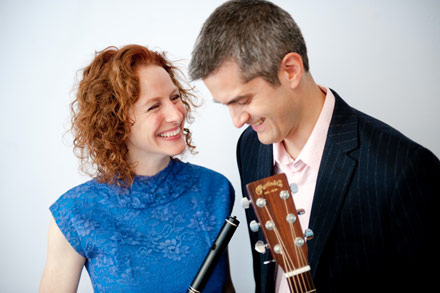 Irish flute-player and traditional singer Shannon Heaton and her guitarist-singer husband Matt offer a modern take on traditional, centuries-old Irish music. The Boston Globe has called their playing “masterful and inventive;” though Matt and Shannon’s entertaining and organic onstage banter is almost good as the music.

The Heatons have an easy rapport with audiences and a knack for storytelling. Their shows are chock-full of fine musicianship and good humor, rich in variety and emotion as they move seamlessly from fiery Irish flute- and guitar-based instrumentals to songs about love, death, and bicycles.