The American Idol season is heading into its final stretch (Wednesday & Thursday, 7 p.m., Fox), but it’s not the must-see TV of yore. Ratings are dropping, rival singing competitions are coming on strong, and the last half-dozen winners have been nondescript. We’ve been around the block too many times to buy into the finalists’ personal journeys, which we now know will likely culminate in touring Broadway musicals, at best.

The series’ decline makes you understand why it decided to play the novelty card by hiring Nicki Minaj. She wasn’t placed on the judges’ panel to offer perceptive observations about singing, but to catfight with Mariah Carey, wear Halloween wigs and make outrageous statements. She earned her paycheck right out of the gate when she told a contestant: “I wanna skin you and wear you.”

The problem is, even viewers who found this comment amusing (former concentration-camp commandants?) probably tired of Minaj-style idiocy after a few weeks. And where does that leave the series? It’s now gone as far as it can as a novelty attraction while losing respect as a showcase for serious vocalists. 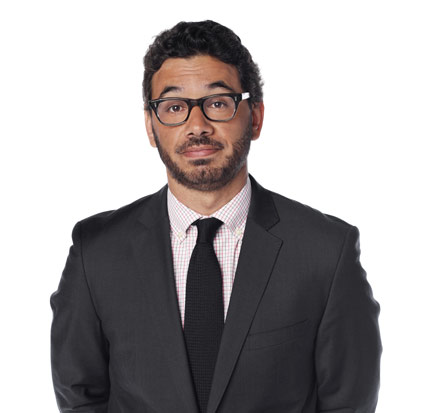 Al Madrigal has a new standup special on Comedy Central.

Al Madrigal is one of The Daily Show’s best correspondents, and he confirms his comic credentials in this excellent standup special. Madrigal has an understated style, telling long-form stories from his life as a husband and dad. The titular rabbit is a tattoo on the neck of a scary-looking L.A. gangster who doubles as his son’s pee-wee football coach. Madrigal freaks out when he meets the coach for the first time, imagining that the tattooed tears signify some horrible gangland rite of passage. “Why is the rabbit crying?” he whispers urgently to his wife. “Why is the rabbit crying?!”

You never find out, but it’s not hard to figure out why the audience is laughing.

The new science series offers insights into the human mind using experiments and games. In this week’s episode, host Jason Silva presents a lively examination of fear —why we experience it and how it works. Silva consults with a “dread specialist” (yes, that’s an actual job title) about the mysteries of the amygdala, which responds to danger signals in the environment. Horror filmmakers are well versed in exploiting the amygdala, as when they use high-pitched music. It mimics the sound of a baby in distress— a frequency guaranteed to freak us out, thanks to evolution.

The episode has given me new respect for my own fearfulness. Silva points out that our hard-wired response to danger helps us survive not only as individuals, but also as a species. Fear of the dark, he says, led to the invention of the light bulb, just as fear of disease has led to cures.

Maybe I’ll be a dread specialist when I grow up. 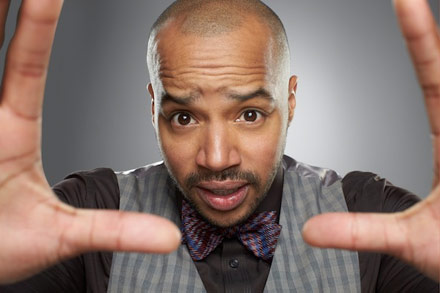 Donald Faison, host of Who Gets the Last Laugh.

Who Gets the Last Laugh?
Tuesday, 9 pm (TBS)

Each week, three celebrities compete to see who can devise the funniest candid camera prank for unsuspecting citizens. The winner of the contest gets $10,000 to donate to a favorite charity.

In this week’s episode, the pranks cooked up by Aries Spears, Natasha Leggero and Andy Dick are cruel and indefensible…not to mention hilarious. In Spears’ segment, a locksmith is set up to look like he’s robbed a jewelry store, with the police (i.e., actors) showing up to scare him to death. In Dick’s segment, a hairstylist is made to think she’s accidentally dyed a bride’s hair blue and ruined her wedding. A better man than I would have turned off the TV in disgust, but I was laughing too hard to act responsibly.

I’d feel much better about enjoying Who Gets the Last Laugh if I knew the winners were donating their earnings to a charity for traumatized victims of celebrity pranks.

In this new series, a group of smart, witty, raunchy young women share their candid views on a variety of topics. A spinoff of MTV’s Guy Code, it’s a peek inside the female mind for those (like me) who’ve never been inside one before. Male viewers would be well advised to take notes.

On the subject of the dance floor, for example, one commentator explains how a guy can break into the seemingly impenetrable circle of women dancing in a group: “The only thing he needs to do is buy me an Appletini and tell me he likes my shoes.” Duly noted!

We also learn about the female approach to friends-with-benefits. One ironclad rule, apparently, is that women should never do anything with an FWB that Bella did with Edward in the Twilight movies. That includes staring deeply into his eyes or lazing with him in a field of flowers.

Now if you’ll excuse me, I’m off to order an Appletini.