Grant-Lee Phillips performs songs from his new album Walking in the Green Corn at Legion Arts in Cedar Rapids on May 15. (photo: Ken Scott)

The last time musician Grant-Lee Phillips remembered being in Iowa was back in 1995, when his band Grant Lee Buffalo opened for R.E.M. at Stephens Auditorium in Ames. He found the rural landscape beautiful and talked to his wife for several years about moving from their California home to the Hawkeye State. He was particularly interested in the city of Davenport because of its location on the Mississippi River.

“But then the flood happened,” Phillips noted over the telephone from his home in Burbank, “and that washed that idea away!” Phillips continued, “Either that or I’d go to Sioux City, because I love their sarsaparilla soda.” It was just a minute into the conversation, and he was already cracking jokes with a stranger.

Grant Lee Buffalo had four major label releases during the ’90s and toured with major arena rock bands such as Pearl Jam and Smashing Pumpkins as well as R.E.M., but despite positive reviews, the group never made it big. Phillips has been largely on his own since then, releasing six solo records in the 21st century. His latest, Walking in the Green Corn, draws heavily from his Native American heritage. He’s a registered member of the Creek Native American tribe (on his mother’s side) and paternally he has both Blackfoot and Cherokee ancestry.

Phillips knows the importance of corn to a place like Iowa, but he also notes the crop’s significance to Native Americans. “The green corn ceremony is a big part of the spiritual tradition of renewal that indigenous people all over the country celebrate. The entire album, inspired by my ongoing pursuit of my heritage, offers a prayer for better days ahead, a better harvest. You can draw a thread through the whole record. It is preoccupied with this theme,” he said.

He’s also aware of the thin line that separates the stereotype of Native Americans as more in touch with nature through mystical racial powers as compared with the truth of his individual experiences and family memories. “I think it has to with extracting songs from my personal relationships and the stories I was told as a kid,” he said. “You can write about archetypal experiences from your private perspective and the local details become universal when you approach them in that way.” 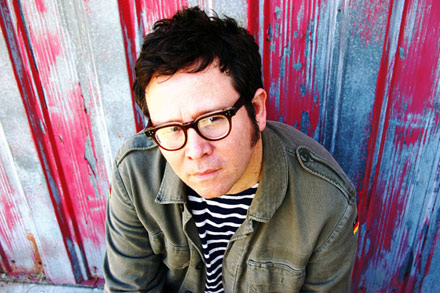 The other technique Phillips used to open his songwriting abilities and to avoid clichés was to write from a fugue state. “I try to create directly from my unconscious. For me, that’s usually in the late afternoon when I am in a half-awake state. I’ll take a walk and let things come to me—not forcing it—but singing it before writing it. I will get hung up on humming a tune, and then certain words come that seem truthful. Then I fill in the blanks. Hopefully, it says something new or says something in a new way.”

Phillips said he recorded songs for the new record almost as quickly as he wrote them. At first he thought he was creating demos or songs that would be fleshed out later. “I would play the recordings for my wife as we drove around California, and we realized an album was taking shape. The very spontaneity and minimalism gave it a lot of mood,” he said. With the exception of violin and vocals by Sara Watkins (formerly of Nickel Creek) and an understated vibraphone part by Alexander Burke, everything on Walking in the Green Corn was performed, sung, and engineered by Phillips.

The acoustic nature of the music and the gentle manner in which Phillips sings and plays guitar suggests that this is a soothing record. That’s only superfically true. For example, there is “Fool’s Gold,” a soft, lilting ballad about the suffering incurred by the desire for wealth. There is an anger to that song. “It’s a serene melody borne out of the pain from living in 2013 and coming to terms with all this mess we are in. We have placed our faith and values in a world where the system seems to be crashing all around us, and we pretend not to notice,” Phillips said.

“Everyone in America has been dealing with a prolonged low-grade anxiety. People need to realize there are still opportunities for re-envisioning our lives and making the most of it.” Phillips stressed that there can be better days ahead.

The song “Walking in the Green Corn” concerns looking ahead. Phillips purposely chose to celebrate growth rather than the harvest. “Besides, ‘Walking in the Golden Corn’ has too many syllables,” he joked.

Phillips will perform at CSPS in Cedar Rapids on May 15. He was pleased to know that May 15 is the traditional planting date, the day when the danger of frost has passed. He hopes to see farmers sowing their seeds during his drive.

“I still might move to Iowa someday,” Phillips said. “Living in California, one is always aware that the earth beneath one’s feet might disappear.” He wasn’t kidding: after an earthquake, he moved from northern California to southern California. “Besides, with the beauty of climate change and the chance of an earthquake, Iowa might soon be beachfront property.”