A sequel is an add-on to a tale that hooked its viewers into wanting more, but doesn’t necessarily deliver more. And there lies the rub. The first Iron Man thrilled us with compelling characters, snappy dialogue, and a superb story. But Iron Man 3 is more focused on staging a show—a 3D extravaganza of explosions, special effects, and the organized battles between good and evil. Yes, I know, the filmmakers are crying all the way to the bank. But it’s the juice of Iron Man #1 that drew us back into the theaters and made box office history. 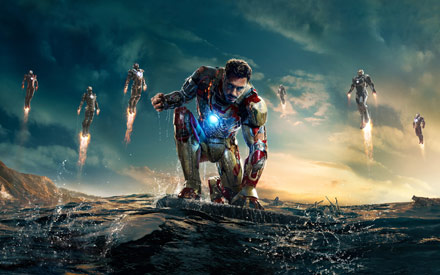 Robert Downey Jr. is still Iron Man/Tony Stark, the cocky genius engineer/inventor billionaire. Stark’s home is a Disneyland of gadgets, including a small fleet of iron men and a digital assistant named Jarvis who obeys his every command. But Stark is plagued by anxiety, insomnia, and a shortage of clever quips. And honestly, sometimes it seems like the guy who’s playing him would rather be somewhere else.

Iron Man 3 opens with a brief flashback to a convention where a geeky, persistent young scientist named Killian (Guy Pearce) wants to collaborate with a disinterested Stark, who humiliates him. Killian returns, so make note. Meanwhile, back in the present: the Chinese Theatre in Los Angeles is bombed by a chronic anti-American named the Mandarin, who is responsible for many attacks. Stark vows to personally take him down. This mission plants him in Tennessee investigating a similar attack, minus his iron gear, and the forces of evil give him a run for his money with an interesting twist. If you love action hero films in 3D with a strong cast, Iron Man 3 dazzles. Just don’t expect it to measure up to the original.   B-

Mud: A Coming of Age Tale | Secrets, Mysteries and Unanswered Questions Along the Mississippi