In Arkansas on the banks of the Mississippi, 14-year-old Ellis (Tye Sheridan) lives with his parents in their humble houseboat. One morning, Ellis’s buddy Neckbone (Jacob Lofland) takes Ellis to an abandoned island in the river to show him a small powerboat lodged in a tree. The boys claim the boat as their private tree house, but a bag of fresh bread reveals that someone is living there. 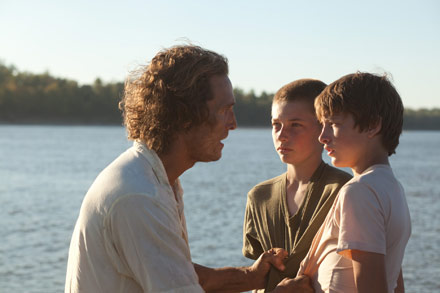 Racing back to their boat, they meet a lean, scruffy man named Mud (Matthew McConaughey). He’s hiding out on the island with his “lucky shirt” and a pistol, and claims he has to wait there for his sweetheart Juniper (Reese Witherspoon) to join him. Mud tells the boys to bring him food and he’ll give them the boat when he leaves. Neckbone says the boat is theirs anyway, but Ellis wants to help—for the sake of true love, and because “it’s the right thing to do.”

But the more Ellis helps, the more Mud asks of him, and soon Ellis is deeply involved in the secretive life of a strange man.

With its modern Huck Finn flavor, Mud is a cryptic, contemporary tale about a culture along the legendary Mississippi River. It’s also a coming of age for a boy facing-off with life’s most basic lessons. Ellis’s parents are getting a divorce and he’s trying to fathom why love is fickle. He gets a crush on an older girl. And he tries to help Mud and Juniper re-unite—maybe then his world will make sense again. Ellis is also learning lessons about trust and being true to himself. And as viewers of all ages, we’re reminded that humans are complex, inconsistent creatures, and that our assumptions about the people we think we know are always subject to change. 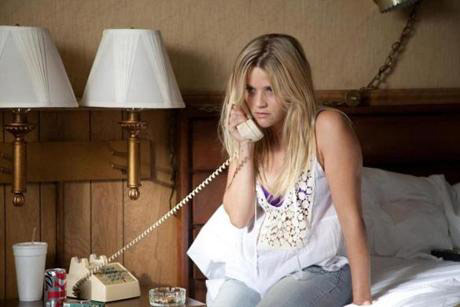 Young Tye Sheridan (The Tree of Life) navigates his leading role like a pro, as do McConaughey, Lofland, Sam Shepard, Michael Shannon, and the rest of the fine cast. Writer-director and Arkansas native Jeff Nichols (Take Shelter) drives this slow but suspenseful drama with a trajectory that’s as unexpected as that boat in the tree. And like the mighty and muddy Mississippi, Mud is clouded with secrets, mysterious people, and unanswered questions to ponder, while its lean dialogue flows with some of life’s most simple wisdom.    B+

Iron Man 3 | All of the Special Effects, Little of the Wit That Graced Iron Man #1

Iron Man 3: The China Cut | And a Commentary About The Future of Global Film