Author’s note: Hello! I am back to write about movies. However, I live in Beijing now and the screening options here make Iowa seem like the East Village. So I will not always write about new releases; it may be new DVDs, TV shows, or even older movies. Regardless, glad to be back!

You may have noticed recently that an awful lot of films have Shanghai and its iconic “pearl tower” skyline in them. There’s no real narrative reason why James Bond went to Shanghai and Macau in Skyfall; he could have just as easily gone to, say, Kuwait City and Monte Carlo. But there’s a big business reason. China restricts the number of foreign films it allows for import unless the film is deemed a co-production. In order to be a co-production, the film must shoot partially in China and include Chinese actors. As a result, some films, like Looper and now Iron Man 3, actually get their own special China cut with extra scenes to appeal to Chinese audiences.

In Looper this seemed to work fine (I did not see the Western cut). In Iron Man 3 it’s so hackneyed that I was simultaneously amused by its lameness (and if social media response is any indication, so were Chinese audiences) and deeply dismayed at the future of film entertainment.
In Iron Man 3, the extra scenes mainly come at the end, where Tony Stark goes to China for heart surgery (the natural health-care destination for billionaires the world over), and two somber and sage Chinese surgeons have a brief conversation—in unsubtitled Mandarin—about how even heroes need their own heroes and how this has never been a successful surgery, etc. And . . . that’s it. It is an astonishingly weak, tone deaf coda to what is a fairly sprightly tentpole film. There were audible groans in the theater when I watched it. 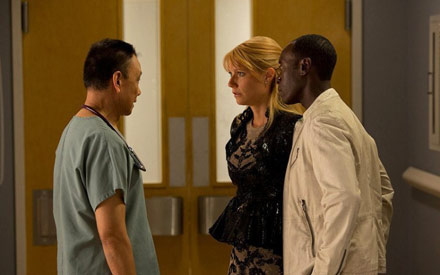 Foreign box-office now accounts for 65 percent of the theater revenue of most tentpole films, and China is the largest single foreign market—and will only grow in future years. What this means is there will probably never be a true Chinese villain in any major blockbuster again (in Iron Man 3, the Mandarin is revealed to be anything but Chinese in a rather clever fashion), Chinese cities will continue to pop up/be destroyed, and Chinese celebrities will receive inconsequential roles (Transformers 4 is already on top of this).

Making blockbusters with foreign audiences in mind is a fairly new development. Back in the ’70s and ’80s, when the modern blockbuster was born with Star Wars, Jaws, Raiders of the Lost Ark, Ghostbusters, and all the other beguiling classics they keep “re-booting,” there was no consideration for foreign revenues. Studio executives actually liked movies. Now, as Steven Soderbergh recently detailed, executives treat the industry as a rote business and nothing more.

Obviously, it is a business. But if studios are going to live by making maximally appealing safe films that don’t have to be good to make money, then they have to accept when that proves hilariously untrue, as with flops like John Carter, Battleship, and the Green Lantern. It’s fairly safe to deduce that the reason why Iron Man 3 is making more money than Iron Man 2 is because it is better.

If we are going to have truly global blockbusters, I can only hope that occasionally they will be truly global: imagine if Baz Luhrman had made The Great Gatsby an interracial Bollywood extravaganza, with Gatsby a rags-to-riches native Indian. That would be far more interesting than dropping dub-step in a prohibition party.

The other sad consequence of all this is we now have five kinds of studio movies: CGI flicks, kids’ movies, broad comedies, serious Oscar movies, and rom coms. What’s missing? Smart adult thrillers, dramas, mysteries, and romances. This is why Argo, a very entertaining movie, was treated like an instant classic, instead of the solid political thriller it was.

It’s easy to be nostalgic about media, but I really do think it’s clear that movies used to be better. At least TV is exponentially better than the multi-cam morass of the ’80s and ’90s, to the point that any two episodes of Breaking Bad are better than 95 percent of movies in a given year.
If this sounds like an elaborate defense for why I might be writing more TV DVD reviews in the future, it might be, but wouldn’t you rather read about Top of the Lake or Black Mirror, over a review of bowdlerized version of The Lone Ranger?  Iron Man 3—The China Cut: B

Mud: A Coming of Age Tale | Secrets, Mysteries and Unanswered Questions Along the Mississippi

The Fosters: A Modern Day Brady Brunch | The Fosters Offers an Alternative Vision of a TV Family