Care of the cows

I read several accounts in the Indian press in which some of those attending from small villages were interviewed. One common sentiment emerged: they came with faith that a ritual bath during the Kumbha Mela would wash them clean of sin so they and their families would have a better life and also a better birth next time around. It seemed to me that sin in these quotes was conceived of as a kind of upsetting of the cosmic balance through individual wrongdoing, an imbalance that could be righted by a ritual action emulating the fundamental creative process of nature symbolized in the myth of the churning of the milk ocean—or so I thought rather complexly when I read their simple quotes in the papers. 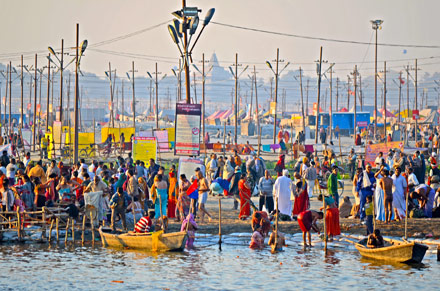 Grounds of the Kumba Mela

The mela was a genuine fair of immense proportions, akin, I suppose, to the fairs held around the great cathedrals of Europe in medieval times, except of course on a scale many orders of magnitude larger. There were elephants that would bless you with their trunks and then convey a coin or a ten-rupee note to the mahout. 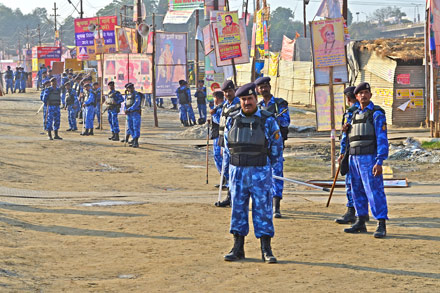 There were Rajasthani men in turbans astride camels, police on horseback and armed sentries on towers to keep order by their mere presence as well as innumerable fast-food cafes, carts selling supplies for cooking—rice and flour and dahl and yogurt (there was an entire administrative department of the Kumbha Mela in change only of milk). 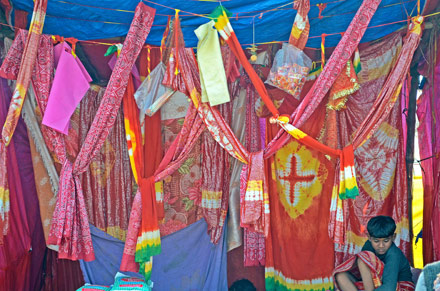 Other carts were selling pakoras and sweets, hawkers with strings of beads spread on the ground at the roadsides, beggars accepting handfuls of rice on cloths in front of their spots beside the roads (one of the ways to get punya or religious merit at a mela, besides a ceremonial dip, is by charity, and the poor villagers who’d come from all over India had little to give so they’d carry small sacks of rice and scatter a few grains onto the beggars’ cloths). 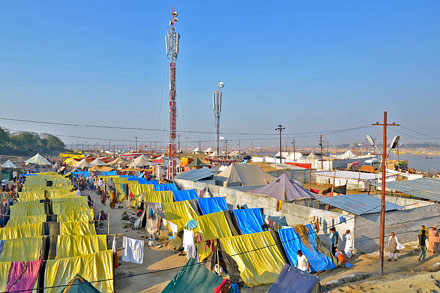 Cell tower in a tent city

And there was no carnival atmosphere, for this was a holy event, both a blissful and a solemn occasion, where everyone observed due decorum, conscious, it seemed, of a cosmic hierarchy: ascetics would bathe first and later heads of religious orders surrounded by crowds of devotees and onlookers and feted by small musical ensembles of tabla, horn and shennai. When Bollywood stars or politicians arrived, escorted by armed bodyguards, they were mostly ignored, for this was a spiritual, not a secular occasion, and the light of celebrity counted no more than a fire in the sun among the crowds who’d come to bathe in divine waters, for no doubt the gods and goddesses bathed before anyone else. 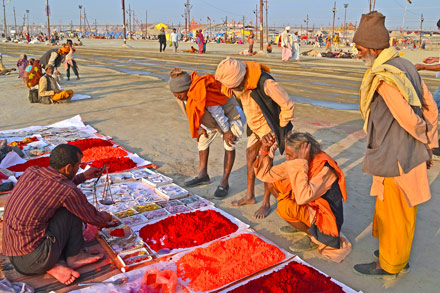 The mela was an enormous conglomeration that reached a human population, as I’ve said, of 32 million at its peak, making it by far the largest city in the world. It was divided into 14 districts, each with its own magistrate, police and departments for sanitation (there were at least 100,000 toilets—tented holes in the ground—and they were cleaned regularly. In this country where people routinely use open public spaces to pee, I never saw that once—amazingly, nearly everyone used the facilities provided), departments for food, for health (20 small and two large hospitals), for telecom (dozens of tall steel cell phone towers on wheels harnessed to diesel-powered electricity generators)—every department of governance a big city needs. And at every dawn teams swept through the grounds collecting garbage and cleaning the latrines. 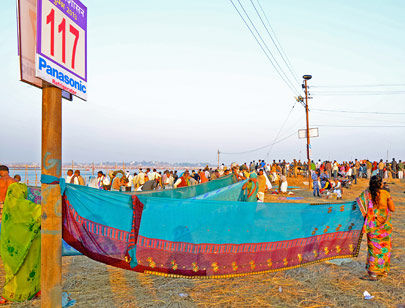 The cops were everywhere, at every crossing of the many streets, and they were pleasant and helpful. On one day I heard that 40,000 people had become lost, separated from their families or villages, and it was a main purpose of the police to reunite them. The U.S. government, I was told, sent a delegation to observe how in the world the Uttar Pradesh government was able to organize and efficiently administer an ad hoc city of such huge proportions on 6,000 acres of very dusty flood plain. 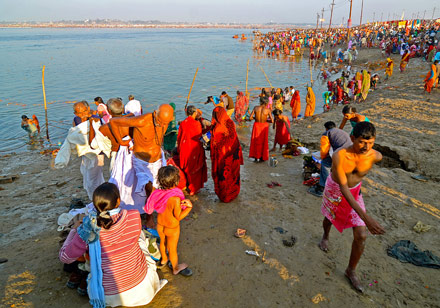 As a postscript I’ll add that the dust of the Kumbha Mela was sharply irritating to eyes and lungs. The authorities had water trucks and boys with fire hoses regularly spraying the grounds to try to keep the dust down. When it rained, as it did heavily on February 15 and 16, the dust turned to mud. At least half of the Purusha who went (including me) got a nagging cough that lasted for weeks—what Dr. Triguna once called “the kiss of the Kumbh.” It definitely was not the healthiest place in the world but was, nonetheless, an experience not to be missed—and also one not to be repeated by me.