I picked up my heavy Burton bag from the conveyor belt and made my way through the Los Angeles airport, my eyes red and swollen after a sleepless flight from London. As I walked, I kept looking around to see if I could spot Anne’s slim athletic body somewhere in the crowd, but she wasn’t there. I noticed an exit sign and headed in its direction. Outside, in the warm air dense with the sound of cars and buses, I heard Anne shout my name in her sweet German accent. We embraced and said our hellos as we waited for Stefan to bring the RV around.

Five years ago, while working as a model, I had met Anna and Stefan on a photo shoot in South Africa. Stefan, a successful sports photographer, and Anna, a model and Stefan’s assistant, were both active sport fanatics. Since then, we had done many shoots together for various sports brands in Austria, South Africa, and Spain. This time the plan was to take an RV to all the spectacular nature spots around the West Coast of the U.S. to shoot running and biking products.

As Stefan parked in front of us, I quietly took a spot next to the window and allowed my eyes to drift over the cement surfaces of Los Angeles as we made our way towards our first stop, San Luis Obispo.

We spent two nights at Stefan’s cycling buddy’s house in the hills outside San Luis Obispo. During the days we shot pictures on his rocky and grassy land, modeling outdoor cardigans. I tried to smile happily for the pictures even though I was still struggling with jet lag.

On the last day we set out for Lone Pine, a small cowboy town near the Alabama Hills, which is part of the Sierra Nevada Mountains. We passed Sequoia National Forest and stopped at a stretch of grassland that Stefan thought would be good for photos. 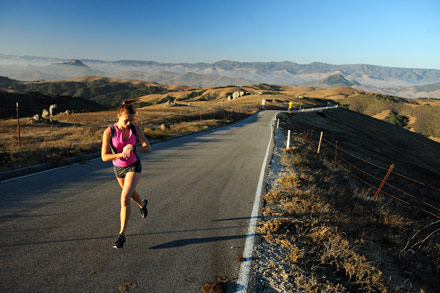 On location, fellow model Toby and I changed into the outfits Anne gave us while we waited for Stefan to direct us. The brand’s slogan was “Run like an animal,” so we amused ourselves by shouting it at one another constantly. Stefan asked us to run back and forth to a 200-meter mark, synchronizing our strides with one another while he shot.

After stopping to take photographs at various points, we finally made it to our RV park, where the wind was howling and cold. I bundled up and walked over to the communal showers. Exhausted after a day spent running, my body recoiled from the cold wind.

Back at the RV, Anne had made a simple dish of spaghetti with tomato sauce, and we all ate quietly in the dim light. I curled up in my sleeping bag spread over the bunk bed, which converted into a dining table during the day. This would be my bed for the next three weeks, and it took a few nights to get used to it.

The next morning I woke up to quiet, clear skies and pink light from the morning sun streaming through the RV windows. I was the first one to move. Slowly the others joined me and we got dressed for the shoot.

We set out on our bikes, our backpacks filled with water and snacks. I felt a little silly in my pink and black cycling shorts and shirt. The helmet sat awkwardly on my head, but I tried to play the part. Stefan, Anna, and Toby were all avid cyclists and even though I was relatively fit, I was more suited to the running portion of our adventure.

We rode through the Alabama Hills’  meandering valleys, enjoying the spectacular scenery, including jagged rock formations that have served as the backdrop for many Hollywood Westerns. I tried hard to keep up with the others’ fast pace. Occasionally, Stefan would ask us to stop and pose at a scene he particularly liked, or he would shoot Toby or Anna doing bike stunts off some of the steep rock slopes. 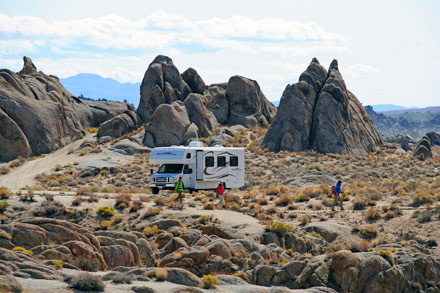 The RV: home for three weeks. (photo by Stefan Eisand)

We stayed in Lone Pine for another two nights before we headed to Las Vegas through Death Valley, one of the hottest and driest places on earth. It has an eerie feel about it, with its yellow sandy hills rippling into the horizon. As we drove into the basin, we stopped for Anna and Toby to dress for a shot on the road bikes. Stefan and I followed them with the RV. I drove as Stefan photographed them bent over and tucked into their bikes as they reached speeds of 65 miles an hour. When they got back to the RV, they were both flushed with exhilaration.

For me, Death Valley was the lowest point of the trip. My fatigued body was having trouble adjusting from city life to endless running and biking outdoors. Stefan decided to give me the rest of the day off while they shot at places along the road.

After a night in Las Vegas, staying at the Circus Circus RV park featured in the movie Leaving Las Vegas, Stefan was eager to get out of the city. He always seemed to feel claustrophobic and frustrated in urban areas. We headed out to Red Rock Canyon, where Stefan and Toby clambered up the side of a big rock face to get a particular shot. Tourists were staring at them, wondering what they were trying to do, as Toby rode along the edge of the rock with nowhere to go. But so much of photography is about illusion, and Stefan understood that he would disguise that inconvenient detail in the final picture.

When we arrived at our next camping spot, the Gooseberry Mesa Trail in Washington, Utah, Toby attached his hammock  to a couple of trees so he could sleep outdoors. Once it got dark, there was not much to do, so the rest of us tucked ourselves into our sleeping bags to rest up for the next few days of riding. As my friends fell silent, I watched the stars through the RV window from my sleeping bag.

The next morning, we prepared the mountain bikes, dressed in our riding gear, and set out along the narrow path cutting through small trees. We stopped at a heap of smooth rocks where Stefan wanted us to cycle our bikes down a steep stone slope. I had never done anything like that before, so Anna gave me safety tips and pointers on how to position myself on the bike. 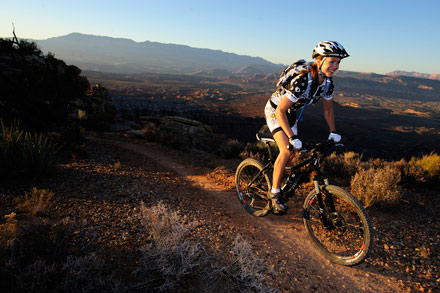 As we moved along the rocky path, it took a lot of arm strength to keep the bike stable, but I was able to keep up. As the trail suddenly opened up, we followed close to the rim of the mesa, with a breathtaking view of the water-carved canyons below and the giant sandstone sentinels of Zion National Park in the distance.

After shooting for hours, we finally made our way back to the RV. My skin felt sun kissed and salty from the day’s sweat, and my heart felt happy. I felt I’d truly experienced the magic of Utah.

We stayed for two more nights, even though we had no running water. I bathed myself with wet wipes. When we finally made it to a RV park, I had the best shower of my life. Being out in nature, living simply, and learning to appreciate things like a shower again were nourishing in ways I never could have imagined. Everything around me seemed to come alive. 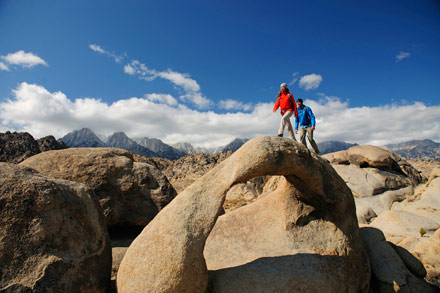 The next day we drove to Zion National Park to shoot some road biking. I started feeling more confident in the clothes and comfortable on the bike. Smiling for the camera was becoming easy.

After Zion we visited Yosemite, before returning to Lone Pine one more time to scale Mount Whitney.

Climbing Mount Whitney turned out to be one of the most challenging experiences of my life and a long story in itself. The four of us set out together for the 14,550-foot summit at four in the morning. After seven hours of hiking and only a mile from the top, I started to feel unwell from the severe altitude. My friends, who thought I was following behind them, continued on without me. As I climbed higher, I started to experience mild hallucinations and realized that I had to go back down on my own. At that moment I had met my physical limit and learned that I alone was responsible for myself.

Having completed all of our goals for the trip, we headed back to Los Angeles. It felt good to be back in civilization.

On our last night together we all watched the sunset from the beach, and Toby cooked us a meal of asparagus salad and swordfish. Nostalgia set in as we packed up the bikes and cleared out the RV.

Stefan, Toby, and Anna flew back to Germany early in the morning. My own flight back to London wasn’t until the evening. We had been inseparable for the past three weeks, living together in a very small space. I suddenly felt completely alone, as though I had lost a limb. It felt strange to not have my friends with me anymore.

I walked along Venice Beach, silently observing my surroundings, my senses sharpened from the many nights spent in the silence of nature. When I finally got on my flight that evening, I realized that I was not the same person who had arrived three weeks earlier. And I started to wonder if London was the place for me, when there was so much beauty and wonder in the world to explore.

Tanell Pretorius is an Ayurvedic Wellness Consultant, Yoga Teacher, and Crossfit L1 Trainer. She worked for seven years as a fashion and fitness model in various countries around the world.

Man of Steel | Can the New Zach Snyder Film Save the Series?