Lindsay Lous & the Flatbellys are known for their original tunes, but don’t be surprised if you hear them play bluegrass standards or even Beatles tunes.

Ever since Bill Monroe and the Blue Grass Boys invented modern bluegrass music back in the 1940s, there have been all sorts of offshoots. Contemporary innovations include progressive bluegrass in the late ’60s, newgrass in the ’70s, and more recent movements such as punk grass (Killbilly, Bad Livers)—not to mention Iowa City’s own SlewGrass, Astrograss out of Brooklyn, NY, and Bela Fleck’s tongue-in-cheek polka-bluegrass combination that he calls polkass.

And then there is Lou-Grass. Mike Lavengood, award-winning dobro player of Lindsay Lou & the Flatbellys, describes it like this: “Our collective sound that we call ‘Lou-Grass’ is steeped in the bluegrass style, but also pulls from other traditional, roots music as well, such as jazz, swing, and folk. Within our ‘Lou-Grass’ sound, each band member pulls on the comfort of knowing these roots genres and can stretch out of the box to also focus on free-form, creative expression. . . .” In other words, when Lindsay Lou and her boys get going on their instruments, anything goes!

The Flatbellys are Josh Rilke (mandolin), Spencer Cain (upright bass), and Mark Lavengood (dobro). Based in Lansing, Michigan, the group began as a traditional bluegrass outfit. They took their silly moniker after a remark made to them at an outdoor festival. “It’s good to see a bunch of you flatbellies out here pickin’ with us grey beards,” said an older player who noted the lack of young musicians. The name just seemed to stick.

But that’s only half the story. One night Josh Rilko was performing during open mike night at his hometown venue, Dagwood’s Tavern. Another artist on the bill, the classical and pop guitarist-singer Lindsay Lou, knocked him out. The two clicked—so much so that they not only reformed as Lindsay Lou & the Flatbellys, they also got married. As Lindsay Lou Rilko, she writes the songs (with some help from other band members), sings, and plays guitar and clawhammer banjo. 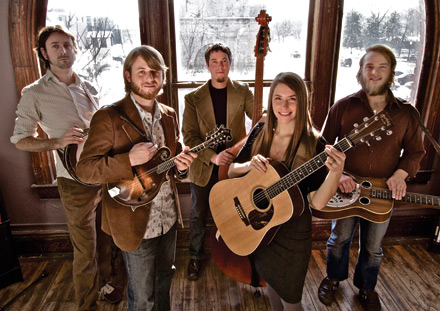 The band has been together since 2010 and has toured nationally and played at festivals across the country. Lavengood notes that the couple keep things professional. “Josh and Lindsay do a great job keeping band matters in the band and personal matters outside of the band, as we all do.” He’s not worried about the couple divorcing and the band splitting up.

Lindsay Lou and the Flatbellys’ albums have been well received by critics in the U.S. as well as Great Britain and France. Lavengood himself won the 2013 dobro competition at the Rockygrass Festival and got invited to perform at the International Bluegrass Music Association (IBMA) with dobro legends Jerry Douglas and Tut Taylor.

Lavengood speaks proudly of the band’s original material in a bluegrass world dominated by groups doing covers of classic songs such as “Foggy Mountain Breakdown” and “Orange Blossom Special.” The old way of judging a band was by how speedily they could play those songs. Lindsay Lou and the Flatbellys frequently take a different approach. Lavengood mentions he especially likes Lindsay’s composition “The Power.”

“Josh and Lindsay went to a protest in the Capitol back in the fall of 2011 when they were discussing taking away collective bargaining rights of teachers. That song has been a standout tune on our new album we released this summer, Release Your Shrouds,” he says. You can find a video of the band performing it live on YouTube.

Lavengood also expresses a deep fondness for Iowa. “I think of the long, expansive highways that we’ve traversed on multiple occasions. Driving westward toward the setting sun . . . music turned up in the van with three of my dearest amigos. Iowa’s a great state!” he says convincingly. We are a place with an especial fondness for bluegrass, including a Bluegrass Music Association of Iowa, several local festivals, and lots of bands.

Hysterical Preservation, Part I: How to Bite Off More Than You Knew You Could Chew