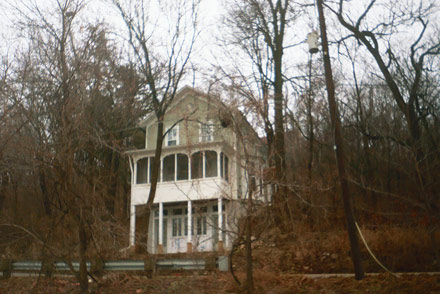 In 2004, Mary Helen and John Stefaniak became the fourth family to own the historic Louis Englert house in Iowa City.  This is the first in a series about the renovation of their 157-year-old home.

Summer 2004. For me, it was an exciting and anxious time. Waiting for my first novel, The Turk and My Mother, to come out in June, traveling around to readings when it did, hoping for reviews and then being too scared to read them, teaching Iowa Summer Writing Festival classes, struggling always to carve out enough time and concentration to keep The Cailiffs of Baghdad, Georgia alive and in progress. There’s nothing like a first novel, I discovered, to get in the way of writing the second one.

You would think that I had enough to do, without taking an interest in real estate, but the house for sale near the foot of the bluff was on our way to almost everywhere. All summer we kept driving past it. It was the house that Louis Englert, a brewer from Belgium, built for his family in 1856, the one that had been a saloon, a stagecoach inn, and, it is widely believed, a stop on the Underground Railroad. It was such an interesting old house that my husband John had gone through it back in March 2004, not long after it came on the market. Intriguing as it was, once he’d been inside, he dismissed it out of hand.

We found out later that Aunt Dorothy (A.D. for short), the last of her line to live in the house, had been an eccentric but sociable soul. At least two generations of neighborhood children from the houses up at the top of the bluff had counted on her to let them climb down and play in her woods and in her cave. (Yes, there was a cave, the real estate agent told us, somewhere back there, hidden by vegetation.)  A.D. would come out with cookies and lemonade for the kids. On the 4th of July, she’d invite friends to her screened-in porch to watch the fireworks launched from City Park, on the other side of Dubuque Street. At Christmas, she’d have an open house for all her neighbors and friends. They’d come, too, though their eyes would water and their clothes would get furry, for A.D.’s hospitality did not end with her human friends. In her later years she opened her home to an untold number of free-ranging cats and things had gotten out of control.

On top of the smell—or underneath it—there was the limestone foundation. It was crumbling in the walk-out part of the basement, also known as the saloon room, where someone had made the mistake in recent years of installing the kind of paneling that traps the moisture behind it. A few decades of walls sweating behind the paneling—while rain gutters more like hanging gardens let water run straight down the sides of the house—had resulted in piles of limestone rubble in the saloon room. When it was raining, a lovely little indoor waterfall cascaded into the room from one part of the wall.

So the place had problems. But it also had that screened-in porch with the view of the park and a bit of the Iowa River. (Little did we know how close the river would get to us as it returned to its old course, and then some, in the flood of 2008.) The house had real stone walkways, and two bay windows, and a lot of history, and a long wedge-shaped lot complete with a little ravine and a limestone bluff and woods and a cave.

We kept making appointments with the real estate agent to go and see it. Twice, to show we meant business, we met contractors out there—a concrete guy and a general contractor—and we got some estimates. We learned that it would cost about twice as much to fix this place (not counting the purchase price) than we had ever paid for a house in our lives. I told my husband John that I rather enjoyed pretending to be a person who could afford to buy a place (i.e., to undertake a project) like this one. He said he was glad I was enjoying myself.

That summer, we walked out to the house at night, and in the morning, and in the afternoon, to see what it was like in different kinds of light. 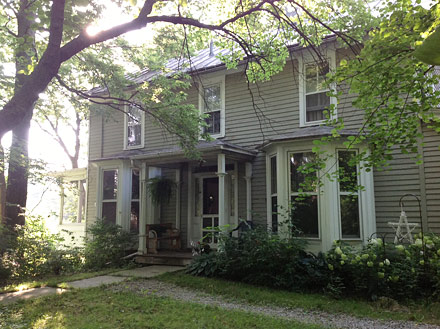 The front view of the house after repairs were completed

Soon it was August. Time for John to start the semester at the U of I and for me to start spending weekdays in Omaha, where I had been teaching for the past eight years at Creighton University. John was still visiting the house. “I found the cave!” he said when he called me one night. “It’s big! I can stand up in it!”

So in August we ran up our phone bill discussing offers and counter-offers at all times of the day. The sellers believed that the historical value of the house made it worth a great deal more than we could possibly afford to pay for it, given the cost of making it fully habitable again. In the end, the condition of the place worked in our favor. A lot of potential buyers and history buffs looked at the place, but we were the only ones to make an offer. I guess everybody else was scared off by the eye-watering smell and the water feature in the basement. Although he proceeded boldly, even my husband admitted to feeling a little nervous at times about what we were daring to undertake.

Not me, though. Maybe it’s a side effect of my endless struggle to be a writer, some kind of collateral courage I’ve developed in other areas, but taking on the renovation of a 150-year-old former saloon and stagecoach inn didn’t scare me at all. From where I sat, saving that old house, as huge a project as it would be—worrying about it, spending every weekend helping John scrape and paint the exterior, prying up the hardwood floors, putting on our masks to tear out lath and smelly plaster, deciding what we could afford to do and what to give up and how to pay for it all—this looked to me like the easiest thing I’d do all day.

As my friend Judene’s mother used to say whenever I said dumb things like that:  Live and learn.

From Bluegrass to Lou-Grass: Lindsay Lou | Lindsay Lou & the Flatbellys Forge Their Own Musical Path