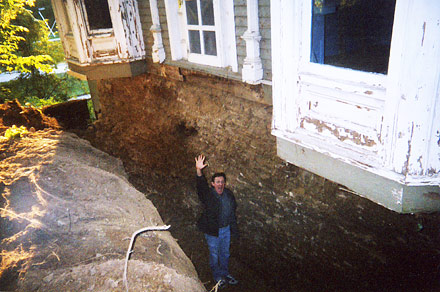 John Stefaniak waves from right underneath where “they tore off the front porch.”

In 2004, Mary Helen and John Stefaniak became the fourth family to own the historic Louis Englert house in Iowa City.  This is the second in a series about the renovation of their 157-year-old home.

Before we decided to buy the 150-year-old house we’d been looking at for months, before we knew anything about construction loans and the itemized estimates they require, I adopted a triage method of thinking about costs.  My first question: What would it take to deal with the piles of limestone rubble in the walkout part of the basement? From the comfort of our little house on Dodge Street in Iowa City, where we’d lived for 20 years, I made an appointment with a contractor—a concrete and foundations guy—recommended by the real estate agent (who was probably getting tired of meeting us at the house every other day). The concrete guy came out to have a look. He walked with us from the ground-level garage down three concrete steps into the basement.

There were three rooms down there, separated by limestone walls about 20 inches thick, each room a step or two lower than the preceding one. The first two were typical below-grade rooms, a little dungeon-like, but with taller ceilings than you’d expect in a house this old and with those interesting “rubble construction” walls of irregular limestone. The concrete floor was clearly a newer development.

The third room, two steps lower than the middle one, was the walk-out, a 20-by-20-foot room that had served as the saloon, we were told, back in the days when the house was a stagecoach inn. The saloon room had a nine-foot ceiling (a plus), two exterior walls of crumbling limestone half-hidden by water-buckled sheets of paneling (not a plus), and one whole wall of casement windows and doors that looked west across Dubuque Street to Terrell Mill Park. A tiny corner of the Iowa River could be glimpsed to the south. 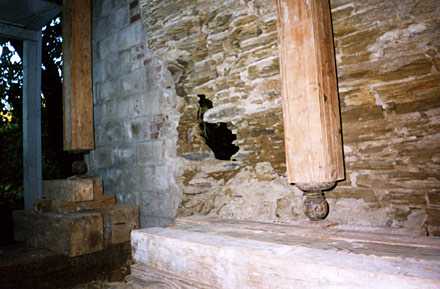 A big hole in the limestone foundation under the porch turned into a “water feature” whenever it rained.

Whether by nature or professional training, the contractor never so much as raised an eyebrow while he inspected the walls.  He didn’t even blink at what turned out to be a sizable hole worn clear through the two-foot-thick limestone in one corner—a water feature, we already knew, when it rained. His eventual verdict was that the saloon room’s exterior walls—close to one half of the whole foundation—would have to be “demo-ed out” and replaced with 10-inch concrete blocks. The remaining walls looked pretty solid, he thought (perhaps by comparison), at least from the inside. Additional costs included excavation, installation of drainage tile (which is actually plastic pipe), and back filling the excavations with drainable gravel. He’d mail us a ballpark figure next week.

I was sitting on the front porch of our house on Dodge Street, when the postman handed me the envelope.

According to the estimate, replacing not quite one-half of the foundation would cost more than the purchase price of our first house, a nice Milwaukee duplex we bought in the 1970s. The number produced a little bit of sticker shock in my husband, a lifelong do-it-yourselfer unaccustomed to paying for repairs and remodels. The general contractor’s itemized cost sheet for everything but the foundation was still to come. That one added up to almost three times the cost of our first house in Milwaukee.

Emily Dickinson wrote, “After great pain, a formal feeling comes.” Somehow, surviving the shock of that estimate made us feel as if the die had been cast. Our summer’s worth of dreaming firmed up into a formal offer to purchase.

We closed on the sale September 27. By the second week in October, the house was flanked by trenches one story deep and four feet wide. They ran the whole length of it, north side and south, from the end facing the street to the end nearest the bluff. Exposed now from the outside, the old limestone walls were all but indistinguishable from the earth. (Without the dirt behind it, the water feature hole was like a window, daylight shining through.) As the structural engineer put it, “These walls have far exceeded their service life.” The foundations guy needed to know what we wanted to do about them.

“Take ’em out!” John said, “All the way back!” and the replacement of not half, but the whole foundation was underway.

I’ve always admired John’s email to our general contractor, calmly informing him of this decision. It ended, “I am going to look hard at all the cost sheets some more to see how I can afford it.”

I was in Omaha, teaching, the week they dug the trenches, but my husband kept me informed with calls and emails reporting things like: “They tore off the front porch today!” 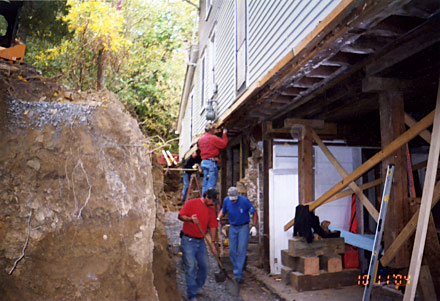 A deep trench around the house shows the foundation under construction.

The equipment was a great source of joy for John: a front-end loader, a power shovel, the Ditch Witch (his favorite), the mini cement mixer. All these toys in his yard! He ran around with a camera the day the footings were poured for the new walls. There were ten men working in the yard that day, all playing on his team.

John himself played a key role. Earlier that morning, two guys had shown up in a special cement truck with a power pump to pour the fresh concrete into beautifully straight and regular footings lined up where the old limestone walls used to stand. From these footings, the new walls would rise, block by block, to meet the rest of the house, waiting—hovering—above.  The cement truck pulled up and stopped on Ridge Road below the walk-out, no doubt blocking both lanes.

“Hey!” John called happily to them.  “This is the place!”

The men got out, shaking their heads. They were peering up the impossible incline, frowning at the canyons on either side of the house.

“This truck’s not going up this hill,” the driver said. “No way it’s getting up there.  I don’t know what they were thinking. No way.”

“Not here,” John agreed with the cement truck man. “But if you back up and turn into the driveway—back there?—you can go around the other side of the house. That’s how the power shovel got in.”

The cement truck man looked greatly relieved. “I’m glad you were here,” he said to John, “because, man, there is no way we can get this truck up in here. How old is this place, anyway? Do you know?”

Old enough to be a stop on the Underground Railroad, John could have said, citing multiple reports of bricked-up openings leading to underground tunnels and caves in the yard.

But that’s a story for another day.

Hysterical Preservation, Part I: How to Bite Off More Than You Knew You Could Chew

How to Eat from Your Garden All Winter