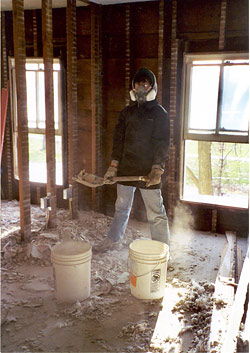 Mary Helen shovels plaster in the tear-out of the upstairs bedrooms.

In 2004, Mary Helen and John Stefaniak became the fourth family to own the historic Louis Englert house in Iowa City.  This is the third in a series about the renovation of their 157-year-old home.

Mysteries abound in an old house like ours—particularly one rumored to have been a stop on the Underground Railroad. The Pownalls, who bought the house in 1928, reported finding a round stone, three feet in diameter, beneath the old wooden floor in a basement room. They told Iowa City historian Irving Weber that the stone covered what seemed to be a bricked-in tunnel under the house. The daughter of George and Maude Ball, who had sold the house to the Pownalls, remembered that “her father bricked up a tunnel that ran to a cave in the yard.”

The cave in the yard had already thrilled my husband, you may recall. He still likes to lead visitors into it after dark and make them turn off their flashlights. It’s clearly man-made: a 10- by 15-foot room with an arched stone entry and a stone ceiling that curves down from a height of six feet in the middle to touch the floor on each side.  The ruins of other stonework suggest that the cave might have been inside another building at one time, but there’s no sign of a tunnel into or near the cave—which is a lucky break for our visitors.

We couldn’t look for the Pownalls’ basement tunnel without breaking up the more recent concrete floor, but lo and behold, when the water-buckled paneling came down in the saloon room, there was in one corner a roundish opening in the limestone wall, filled in with bricks and concrete blocks.

“Looks like a door, doesn’t it?” my husband said to the foundations guy.

The next day, while digging trenches to expose the foundation, the excavator uncovered, on the dirt side of that “door” in the basement wall, not a tunnel but a little room the size of a closet with red brick walls and a curved brick ceiling. A little room under the back yard with a doorway into the basement. Was it a root cellar? A beer cooler? (Englert was a brewer, after all.) Or was it a hiding place?

All very intriguing, but with the house up on jacks and the limestone foundation ready to fall “like a stack of books” (as one workman described it) and a six-month construction-loan deadline looming and a whole house to take apart and put back together by then, there was no time to find out.

As a matter of fact, we were in a bit of a crisis. We had already handed over the purchase price of our former stagecoach inn and closed on the loan that would allow us, as Ezra Pound might say, to “make it new,” when we learned that the single biggest-ticket item of the renovation had suddenly doubled: not half but the whole foundation had to go. In hopes of paying for it, we sat down and did a line-item veto on the project cost sheet, and sending our very understanding general contractor emails like this one:

After further inspection, deliberation, and calculation, we have decided that we will scrape and paint the house ourselves. All items related to replacing the siding will have to be deleted.

That saved us about $20,000 right there. Of course, it also meant that we would have to scrape and paint the house ourselves. And that was the least of it.

The number of tasks that moved to the Stefaniaks’ to-do list continued to grow and eventually included such things as framing in a bathroom, building beaded- board closets in the bedrooms, sanding and finishing all the upstairs floors, and putting up the ceiling (tin tiles over drywall) in the saloon room downstairs, but all of these seem almost incidental compared to the first and biggest of our jobs—the tear-out.

All the lath and plaster on every wall and every ceiling; bushels of squirrel nesting materials behind the walls; all of the woodwork; a lot of old pipes; all the hardwood floors in the living room, front hall, and dining room; and everything in the kitchen—except for one historic wall cabinet—had to go.

Interior demolition. As our daughter Lauren put it, “There is no experience quite like your parents taking you into a room, handing you a crowbar, a dust mask, and safety goggles, and telling you: ‘Just tear all this out.’ ”

These were the months when friends who came by to check our progress grew pale behind the masks we gave them at the door. (Inspectors from the bank looked worried, too.)

We couldn’t have done it on our own.  Much of the time, when John told the contractor he had “help coming in from out of town,” he meant me, but often our daughter Liz and future son-in-law Van would make the four-hour drive from Omaha with me. Lauren, our youngest, had picked just the right year to spend in Iowa City before she started graduate school. Our only hired hand was Ed, a former graduate student of mine, then a starving artist.

While the contractor’s men worked on the foundation in the ditches alongside the house, we were inside piling broken lath and chunks of plaster into wheelbarrows that we rolled out a door and across a wooden bridge that spanned the ditch, over the heads of the foundation guys, and into the backyard. From there, we rolled up another ramp and emptied our loads into the Dumpster, raising clouds of dust.

Prying up oak floor boards with a five-foot long “Burke” bar became one of my specialties. Another was extracting 19th-century flat-sided nails from all the woodwork we had carefully removed. I even worked an extraction scene into my novel, complete with the screech of reluctant nails giving way.

Long after the new foundation was in place, we were still shoveling and hauling. It took us from September 27 to December 19 to get the old stuff out and the furnace on and the plumbers and electricians in. When the drywallers finished their work—taping and sanding on stilts!—we walked around the house in awe. After months of nothing but studs between the rooms, suddenly this looked like the inside of a house again. We were practically finished! Nothing to do but prime and paint the whole interior, put in cabinets and fixtures in a couple of bathrooms and the kitchen, finish the saloon room, do the floors upstairs, paint the historic metal roof, and—this was the clincher—put back all the woodwork—“every stick of wood,” my husband said—that we had taken down: doorframes, window trim, and, after the floors went in, about a thousand miles of baseboard that had to be replaced for olfactory reasons. Lauren got to be very handy with a miter saw. This, together with her math skills, made her an ace at fitting odd angles in the window bays.

Plus, we had another mystery to solve.  Liz was tearing out plaster in a bedroom upstairs when she noticed something red on the boards behind the studs. Then something black and something yellow.  “Come look at this!” she called. She had exposed a long stretch of exterior wall on which someone had pasted a long strip of paper a long time ago, inviting us to come and see “The Greatest Show on Earth!” 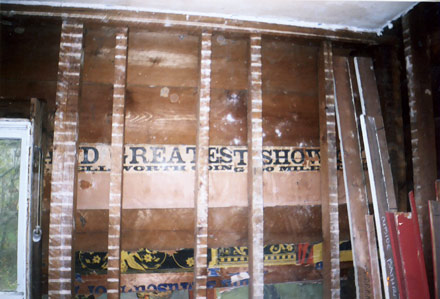 Boards with circus posters were found behind the plaster in the second-floor bedroom that became Mary Helen’s office.