The Paramount Theatre, restored to perfection, is on the National Register of Historic Places.

The seats are from Hancher Auditorium, which was flooded in 2008 and is just about to be demolished. A number of seats at the venue stayed dry during the flood, and the building has been conditioned in the interim. We’re very pleased to be able to keep some of the seats in Iowa City and continue to put them to use at an arts venue!Starting this fall, the Bijou Film Board and its student members will work with FilmScene’s professional staff and board of directors on the operation of its new cinema and cafe, which will be located on the Pedestrian Mall at 118 E. College Street and operate 365 days a year. This summer will be the Bijou’s last season of programming at the Iowa Memorial Union.

Starting this fall, the Bijou Film Board and its student members will work with FilmScene’s professional staff and board of directors on the operation of its new cinema and cafe, which will be located on the Pedestrian Mall at 118 E. College Street and operate 365 days a year. This summer will be the Bijou’s last season of programming at the Iowa Memorial Union.

“The Bijou and FilmScene share a unified vision to build a vibrant cinema culture in Iowa City,” said Bijou Executive Director Jesse Kreitzer. “This partnership ensures that the Bijou’s longstanding tradition of showcasing the best in independent and foreign cinema will continue to thrive.”

FilmScene is nonprofit organization founded in 2011 by Andy Brodie (a former student director of the Bijou) and Andrew Sherburne to connect the community through film by presenting programming that entertains, inspires, and educates. 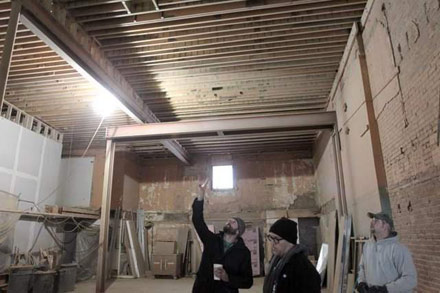 “We are proud to partner with an organization with such a rich programming history,” said Brodie. “FilmScene will offer students real-world work experience and an opportunity to study and enjoy film in a professional, purpose-built cinema setting. Together, we’ll build the home for film that Iowa City deserves.”

The Bijou Film Board will continue to receive funding from the University of Iowa Student Government and the Executive Council of Graduate & Professional Students.

“Student government recognizes the importance and value of the Bijou Film Board and FilmScene partnership,” said former UISG President Nicholas Pottebaum, who helped negotiate details of the partnership. “The two organizations have displayed an unwavering commitment to enriching the cultural and cinematic landscape of Iowa City." 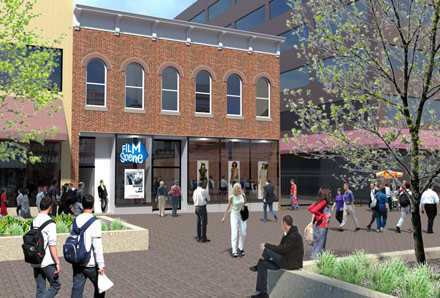 An artist’s rendering of the new exterior at FilmScene on the Pedestrian Mall.

New UISG president Katherine Valde added, “This is an exciting opportunity to continue expanding a vibrant downtown. Student government is delighted to support the Bijou Film Board in its new endeavor and believe that this new partnership will foster a great entertainment and cultural hub.”

Students will receive discounted admission to FilmScene, as well as be eligible for a discounted annual membership. FilmScene members will enjoy the lowest admission price and a variety of other membership perks, including discounts on popcorn and soda. Details on the membership program and ticket pricing will be announced later this summer. 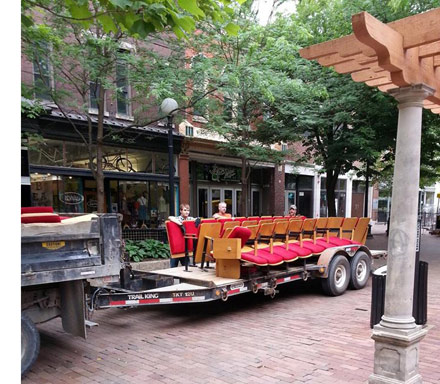 The seats from Hancher Auditorium arrive. Although the venue was flooded in 2008 (and is about to be demolished), a number of seats at the venue stayed dry. FilmScene isdelighted to be able to absorb this valuable part of Iowa City history in the new arts venue.

"This collaboration between FilmScene and the Bijou represents an exciting new chapter in the history of the Bijou, and will provide students with tremendous new opportunities to pursue their passions and learn important skills that they will take with them into the workforce, whether they work in film or another industry," said Tom Rocklin, Vice President for Student Life at the University of Iowa.

Scene 1 marks the return of full-time cinema to downtown Iowa City, which hasn’t had a dedicated movie theater since the sale and closure of the Campus 3 in 2007. In a city-sponsored market survey in 2011, respondents cited “movie theater” as the most-wanted entertainment addition for downtown.

“What’s exciting about this project is that it continues to diversify the mix of uses and activities for both the community at large and for students Downtown,” said Nancy Bird, Executive Director of the Iowa City Downtown District. “These cool cinema houses are emerging in some of the nation’s hippest metropolitan cities–it’s a natural fit for the Iowa City Downtown District.”

Scene 1 will address the immediate demand for quality film programming in downtown Iowa City and serve as an opening act for FilmScene’s plans for a two-screen venue and educational facility to be housed in The Chauncey development at Gilbert and College Streets. The Chauncey is anticipated to open in 2016 at the earliest. FilmScene is collaborating with local developer Marc Moen and moengroup on plans for both Scene 1 and The Chauncey.

"This is one of the most rewarding projects we have been involved in,” said Moen. “A decaying historic building has been restored and repurposed into vital retail, entertainment and office uses. This project was made possible by a strong collaboration between the City of Iowa City, private business and the University of Iowa. It is a testament to what can be accomplished when these stake holders work toward a common goal. Moen Group is honored to have been a part of this project."

More information about FilmScene and Scene 1 is available at www.icfilmscene.org.