Matuto brings their quirky blend of styles to the Landfall Festival in Cedar Rapids Sept. 24 and 27 at 7 p.m. at CSPS; and Sept. 28 at 3 p.m. in Greene Square Park.

Heard this joke? Stan played accordion at celebrations to help supplement his income. One night, on the way to a wedding, he stopped at a local diner to eat some meatloaf. While he was mushing the ground beef into the mashed potatoes, he realized he had left his car unlocked. He quickly ran to his Buick, but it was too late. There were now two accordions in the back seat!

Get it? The joke makes fun of how unpopular accordion music can be. Some people naturally call up memories of The Lawrence Welk Show, where amateurs performed lame renditions of “Lady of Spain” and other such unpleasantness.  Rob Curto, master accordionist and cofounder of the Brazilian-bluegrass band Matuto, has heard all of the snarky squeezebox stories before. But Curto said he hadn’t heard any negative discussion about his instrument in at least a decade.

“Accordions have become cool again,” Curto said over the telephone from his New York City home. “At least in terms of world music, people look forward to the sound. I am much more likely to have someone come up to me and say, ‘I thought I didn’t like accordions, but I really enjoyed the music,’ than the reverse.” 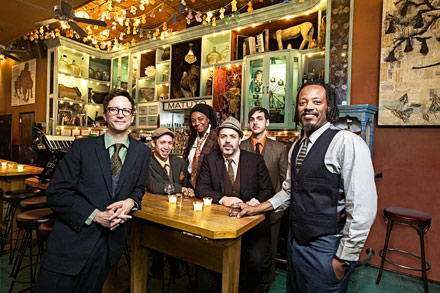 Curto will be in residency at CSPS in Cedar Rapids as part of Legion Arts’ Landfall Festival of World Music 2013, from September 24 to 28. Now in its sixth year, the Landfall Festival will feature at least 12 world-class ensembles, comprising 50 musicians from more than a dozen countries: Brazil, Corsica, Ethiopia, Finland, Ghana, Poland, Sierra Leone, Mongolia, Norway, Reunion Island, Sweden, Ukraine, and the U.S. The evening concerts take place at different venues around town. (See legionarts.org for the most current information.) While Matuto may be the best-known act in the Americas, the other acts have international followings.

The band’s name, Matuto, can be loosely translated as “country bumpkin.” Curto explained, “Matuto is a funny word in Brazil. In some contexts, it is used in a derogatory fashion. When a person from an urban environment thinks of a matuto, that person would say it with a frown. But for people from a rural background, it’s a term of pride. We take it as a symbol of the rich musical tradition from northeast Brazil.”
The music to which Curto refers is known as Forró (fo-HO). The New York City native spent five years learning about it while living in Brazil, although he claimed to have first heard it in Manhattan. Forró has roots in many traditions, including those from Africa, Europe, and the indigenous people of northeast Brazil. Known for its unusual and catchy rhythms, Forró is often meant for dancing.

But Matuto does not play pure Forró, if there is such a thing. Guitarist and singer Clay Ross, the other main member and founder of the band, plays bluegrass, old-time folk, blues, and other Americana styles. Ross and Curto mix the music together to create something unusual. “We don’t depend on any formula. We just put together these odd sounds that feel right, like linking a Scotch-Irish fiddle tune from Appalachia with Cocoa rhythms from Brazil,” Curto said. “We just hit upon a sound that’s ours.”

Think of a peanut butter cup. You get chocolate and peanut butter and come up with a third taste that brings out the best in the other two. “Sometimes you start with a twangy guitar and give it a different swing, the next time you get a blues-drenched vocal and just see where it takes you,” Curto said. He pointed out that not every combination works.

“We try and find a groove. And you can feel it when it is working. You can make anything join together, but it doesn’t mean that you should. We just try and be creative. We are based in different cultures that we love. This passion leads to good things!”

The band released their second full-length album, The Devil and the Diamond, on Motéma Music, in May. It features a range of instruments, styles, and performers in all sorts of odd combinations and delivers a tasty assortment of polyrhythms and percussion. The idiosyncrasies define the group’s character, as the music is seriously weird and immensely likable.

Curto was not sure how many members of Matuto will be present when the band comes to Iowa, but he knows the band will rock out. Or maybe they will perform ballads. Or both. Or even just improvise jazz style with a Brazilian kick. Curto said Matuto does all those things, depending on the venue, the audience, and the vibe.  Curto has performed in Iowa before and he remembered that the Iowa audience was diverse and knowledgeable. He expects the same again this year.