On September 24, 2013, two fabulous musical groups performed at the Englert Theater in Iowa City—the California acoustic duo the Milk Carton Kids and Cincinnati-based husband-and-wife duo Over the Rhine. Both groups delivered an extraordinary evening and are worthy talents to enhance your music collection.

Formed in 2011, this indie-folk duo from Eagle Rock, CA, features Ken Pattengale and Joey Ryan. Both sing and play vintage acoustic guitars—Ryan plays a 1951 Gibson and Pattengale a 1954 Martin—in a style similar to early Simon and Garfunkel, with a fleeting dash of the Everly Brothers. A friend of mine who also attended the Englert concert says that Pattengale’s finger-picking guitar playing is as good as that of the great David Rawlings.

The Milk Carton Kids have been interviewed on NPR and have opened for many artists, including the Punch Brothers and on this night, Over the Rhine. Their latest CD, The Ash and Clay, was released in spring 2013.

During the Englert concert, Joey Ryan spoke to the Iowa City audience between songs in an amusing, almost dead-pan style reminiscent of the Smothers Brothers. After a few songs, Joey mentioned that the audience could download the first two albums (Prologue and Retrospect) for free through their website, but suggested that if the audience felt it would be better to support their efforts, the same CDs would be available for purchase in the lobby.

Suddenly, a lady in the back of the hall who seemed to be enjoying the on-stage banter shouted, “Do the CDs come with commentary?” This led to a five-minute exchange involving Ken and Joey and the lady and her date. The mix of friendly repartee and splendidly performed music provided a refreshing introduction to the Milk Carton Kids.

To begin exploring the Kids, listen to the new track, “Honey, Honey,” which has  Joey wondering why Ken inserted the comma in the title. Next, go to the Prologue CD and listen to “New York” (remind yourself this is not Simon & Garfunkel) and the beautiful “There by Your Side.” It’s hard to imagine listening to their music with anything but a smile.

Classically trained Karin Bergquist (vocals, guitar) and Linford Detweiler (bass, keyboards) have played together since 1989 after meeting at Malone College in Ohio. They were married in 1997 and now live on a 1830s-era brick farmhouse near Cincinnati. Over the years, they have opened for Bob Dylan, Ani DiFranco, John Prine, and My Morning Jacket, and toured as “adjunct” members of the Cowboy Junkies. Since 1991, they have released more than a dozen CDs, with the most recent coming through their own record label, Great Speckled Dog. 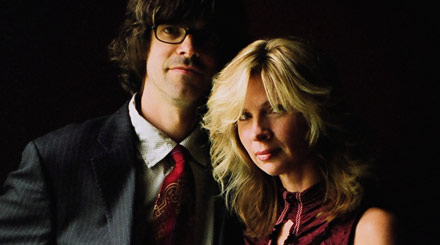 On this night in Iowa City, Over the Rhine proved why they have such an avid following in Ohio, and one that’s increasing nationwide. When they returned for an encore, they showed their appreciation to the Iowa City crowd with a full set of songs instead of the traditional one or two.

Throughout the evening, we were drawn to 46-year-old pedal steel guitarist Eric Heywood, who hails from Mount Vernon, Iowa. Like most pedal steel guitarists, Eric played to complement rather than lead the performance. But the layers he created had a swoon-like effect that made it easy for the audience to exhale  “ahhhh” in deep satisfaction. On the way to the parking deck after the concert, we all walked in silence until someone said, “Wasn’t that great?” You know how we answered.

To get a sample of earlier tracks from the Over the Rhine songbook, try these hauntingly beautiful pieces: “Faithfully Dangerous” (1996), “Ohio” (2003), and “Trouble” (2007). Then go to the 19-song double CD Meet Me at the Edge of the World, released in September 2013 with Grammy-winning producer Joe Henry.

Spend a little time on the websites of both the Milk Carton Kids and Over the Rhine—you’ll discover more reasons to believe that we live in one of the best times in music history.

Our Dog Blue: How Our Adopted Blue Heeler Became One of the Family