Lily Tomlin thinks of herself as an actor first and a comedian second. (Photo by Luis Sinco)

Lily Tomlin is a living legend. The 74-year-old performer has received the Mark Twain Prize for American Humor, the nation’s highest honor for comedy. She’s well known to audiences from several generations for her acting and comedic skills.

Tomlin was nominated for an Oscar for her role in the 1975 film Nashville, won two Tony Awards for her work on Broadway, and  received a Grammy for Best Comedy Album—and this is just the tip of the iceberg. To list all of Tomlin’s credits, awards, and achievements would fill up the page. More importantly to Iowans, Tomlin will appear on November 16 at the Riverside Casino & Golf Resort Event Center as part of the University of Iowa’s Hancher Auditorium events.

Speaking over the telephone from her Southern California home, Tomlin explained that she will be presenting a variety of characters from her past as part of her one-woman show. “It’s my form of stand-up. I talk to the audience about Iowa as different individuals and use videos to satirize myself and others. I behave exactly the same way in New York City as I do in Iowa. I don’t condescend or change my political views or sensibility based on where I am.” She said she would not know how to be anything but herself, even if that comes out through the guise of another persona.

At the end of her show, Tomlin holds a question and answer session with the crowd. The questions are not screened or vetted, and anything can happen. “One of the most boisterous incidents happened in my home state of Michigan back in the day, when someone asked me who I would vote for, George W. Bush or the Marquis de Sade. I chose de Sade. Fistfights broke out. I urged the hecklers from both sides to come on stage and speak their minds, but nobody did.” Tomlin noted that the hecklers preferred anonymity over real engagement. 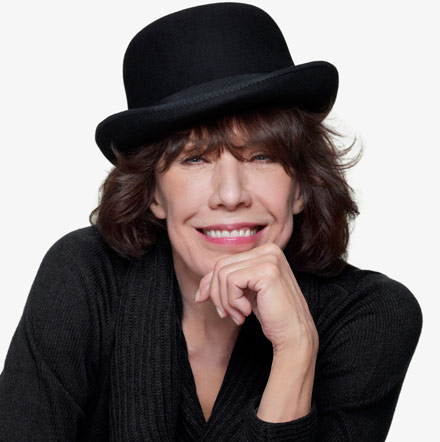 Tomlin considers herself an actor who does comedy more than a comedian who acts, and believes being on stage is the highest form of performance. “Nothing in film compares to theater,” said the woman who starred in movies like The Late Show beside Art Carney, Nine to Five with Jane Fonda and Dolly Parton, All of Me opposite Steve Martin, I ♥ Huckabees paired with Dustin Hoffman, and A Prairie Home Companion, as half of a middle-aged singing duo with Meryl Streep. Tomlin proudly considers The Search for Signs of Intelligent Life in the Universe, a play written by her partner Jane Wagner, her greatest accomplishment. It later became a film.

The movie business has changed, according to Tomlin, just like society as a whole. She said when she and Carney made The Late Show in 1976, sexism, racism, and homophobia ran rampant on the set. “Robert Altman is a great big guy, but a mild director who let the crew walk all over him. They threw water and beer on any woman who was an extra and made comments about their wet t-shirts. Their jokes about minorities and gay people were offensive, and I told them so. When I complained that the film lighting made me look unattractive, they would joke and make patronizing comments about my body rather than listen to me. I brought a mirror to the set so I could see how I was lit and caused a fuss. Altman called a meeting that night to iron things out, but the next day the crew showed up with a ten-foot banner that read “Pretty is as pretty does.” Tomlin sighed. “Things are better all over the globe thanks to feminists,” she said sarcastically. “After all, it took 20 years after seat belts were invented for anyone to use them.”

Tomlin had nothing but praise for her former costars. The primary exception was  Art Carney, who is almost universally adored. “That was the problem,” Tomlin explained. “Carney liked everyone and wanted everyone to like him. He would play the piano between takes to entertain those on the set, learn people’s names and what they liked or something about them. Not everyone should be liked. Some people’s behavior does not merit likeability.” Tomlin was not kidding. She is a gregarious entertainer, but she does not suffer fools. “Or right wingers,” she joked.

Tomlin considers Lena Dunham very talented for her work on Girls. There was a small controversy concerning Tomlin’s comments about the HBO show, but Tomlin preferred not to talk about it lest she be misunderstood. “Just say that I think Dunham is very, very talented,” Tomlin said.

Tomlin has a long history as an activist for gay rights, women’s rights, and other causes. Mostly, she enjoys her reputation as an agitator but feels some of the criticism about her is unfounded. Tomlin was born on September 1, 1939, the first day of the Second World War. “I get blamed for the war, but really Poland was much more of a catalyst,” she joked.

Tomlin considers Lena Dunham very talented for her work on Girls. There was a small controversy concerning Tomlin’s comments about the HBO show, but Tomlin preferred not to talk about it lest she be misunderstood. “Just say that I think Dunham is very, very talented,” she said.

At 74 years of age, Tomlin is still energetic. That said, like most people she sometimes thinks about what happens when we die. “I think not much happens,” Tomlin said. “Actually, that nothing is pretty profound.” She paused, “I think when we’re dead we turn into paper bags. Then we get recycled.” It beats becoming plastic bags!