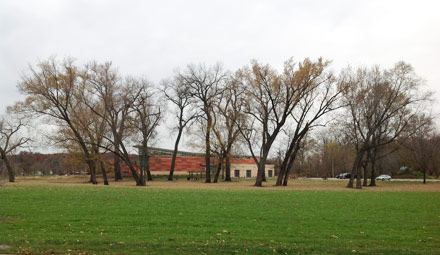 Mature trees in Terrell Mill Park mark the shape of the Island, a picnic spot in the Iowa River from 1881 to 1940.

In 2004, Mary Helen and John Stefaniak became the fourth family to own the historic Louis Englert house in Iowa City. This is the last in a series about the renovation of their 157-year-old home.

Iguess nine years is as  long as you can expect a feverishly scraped, hand-brushed exterior paint job on 150-year-old siding to last. By the summer of 2013, we knew we had to do something. We decided to replace the old siding with “cement board”—long pre-primed boards that look like wooden clapboard made new. When we took the old siding off the back of the house, we weren’t exactly surprised to find the sheathing underneath haphazardly plastered with strips of circus posters—P. T. Barnum here and Millie de Granville the Lady with the Iron Jaw there, plus elephants, horses, the hippopotamus.

The house looked even more like a colorful picture puzzle on the outside than it had from the inside nine years before, when, in the course of tearing out interior walls in our pre-Civil War stagecoach inn, we first discovered circus posters on the boards beneath the lath and plaster. We were thrilled, until we learned that P.T. Barnum’s circus hadn’t come to Iowa City until the 1870s. How could a house built in 1857 be made of boards (apparently recycled from a barn) that advertized P.T. Barnum’s circus? And if the house wasn’t built until 1877—the date of the posters we found—then how could it have been a stop on the Underground Railroad? How could John Brown the firebrand abolitionist have visited the saloon that our walk-out basement used to be?

Afraid that our discovery debunked a lot of long-believed lore, we kept our circus posters to ourselves back in 2004. Now here they were again.

We needed a bold new theory, one that accommodated both the Underground Railroad and the 1877 posters.

I found one on a visit to Milwaukee. An architectural historian who was showing me around an old house there pointed out that the high-ceilinged basement in which we were standing was, at first, the whole house. The two-story frame structure above us was added later. Back home in Iowa City, I looked again at our pictures of the excavation in 2004, when the old foundation had to be replaced, and saw the different colored layers of dirt that made us think, back then, that the limestone walls of the walk-out had been more exposed and less like a “basement” when the house was first built. I remembered that in Margaret Keyes’ notes for her book, Nineteenth Century Home Architecture of Iowa City, our house was described by someone as “‘a three-story house, the first story of stone.’”

I have come to believe that the ground floor of our house—the saloon level—is the pre-Civil War part. The rest was built on top of it shortly after 1877. When I looked for “evidence” to support my theory, an Englert family photograph taken circa 1890 led me to a family history by one of Englert’s descendants. There I learned that Louis Englert’s young friend and fellow businessman Jacob Hotz (1853-1916) was, among other things, a building contractor. Being a fiction writer myself, and knowing that Hotz would eventually marry Englert’s daughter Francis (1859-1934), I imagined a story that, in the immortal words of Donald Barthelme, “does not contradict what is known.”

Louis Englert would have been in his late 60s when young Jacob Hotz first suggested the idea: Why not construct a two-story house on top of the low stone building tucked into a hillside just north of town, where Englert—a brewer, remember—had been operating a stagecoach inn and saloon for 20 years already? By 1878, stagecoach travel was limited to nearby towns, but Walter Terrell’s mill across the road still brought in plenty of business. There was no reason the Englerts couldn’t keep the saloon open downstairs while they enjoyed two whole new floors of living space above it.

I don’t know how many of their 12 children were still with them then, but I can’t imagine that Englert’s wife Clara would have objected to living in a two-story house instead of upstairs from the brewery on Market Street.

Jacob Hotz, the young builder, would have done a fine job for his future father-in-law. He would have placed the exterior boards diagonally at the corners to keep the frame house so straight and true that a buyer in 2004 might open the double-hung windows with a single finger. He might have cut the lumber in his own sawmill, except for the 12-inch boards recycled from somebody’s roadside barn—the same barn whose owner had gotten himself free tickets to the circus by allowing the display of great colorful posters days before the circus train arrived with its 50 cars full of wonders.

And perhaps young Francis Englert made her first impression on her future husband Jacob Hotz while construction was underway. I can see her in the yard with her younger brother Frank (13 at the time) and sister Clara (11), the three of them laughing with delight at the exterior wall going up like a great picture puzzle: part of a horse here and an acrobat there and the “Hippopotamus, Behemoth of Holy Writ” and elephants cavorting around the name of “P. T. Barnum.” 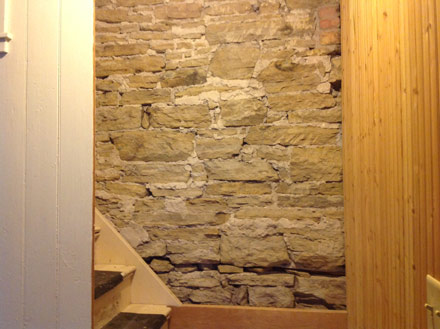 You can’t tell by looking at this wall in the saloon room, but the limestone mortar between the stones turns to dust at the wipe of a finger.

If you buy all that, you may wonder if there is evidence that any part of the house is as old as it’s supposed to be. Yes, there is. If Jacob Hotz had built the limestone foundation in 1878 or so, he would have used cement mortar to help keep those walls from falling over like a stack of books. The 18- to 24-inch-thick limestone walls that stand between our saloon room and the basement rooms are stuck together with older, crumblier limestone mortar, supporting an earlier construction date—say, 1856 or ’57. Also, there’s a great limestone chimney down there (in the very room where a round hole in the floor might have led to a tunnel, and so forth). Above the saloon level, the “newer” chimney is built of red brick.

Allow me one more semi-historical re-enactment.

When Louis and Clara Englert woke up one morning in the spring of 1881 and betook themselves to the side porch of their new home overlooking the Iowa River, they must have been surprised. Until 1881, the river flowed straight to the bluff below the house. From there, it took a sharp right turn to the south toward Iowa City, running alongside the dirt road that later became Dubuque Street. Across the road, the water flowed noisily over Walter Terrell’s dam, turning the waterwheel in his mill.

What lay before the Englerts this morning looked less like a river and more like a lake with an island in the middle. The Flood of 1881 had washed out Terrell’s dam and created a wide, shallow backwater that turned out to be perfect for cutting blocks of ice. Louis Englert’s son John would operate Englert’s Ice Company in Iowa City for decades to come. In summer, the slow-moving waters offered new recreational possibilities. Before and after the turn of the 20th century, you could rent a canoe at Fitzgerald’s Boathouse and paddle out to the Island for a picnic or even a lover’s tryst. When the Pownalls bought the house in 1928, they could watch canoeists and picnickers from the same porch that gave the Englerts their view.  The backwater was land-filled to make Terrell Mill Park by 1940, but even today, we can see from our porch the ghost of the Island—or maybe its skeleton—in a slightly sunken stand of mature and outward-leaning trees across the street.

To read the first installment of the series, go to How to Bite Off More Than You Thought You Could Chew.

Mary Helen Stefaniak is author of the award-winning novel The Cailiffs of Baghdad, Georgia.

Crime-Fighting Through Song: Psych the Musical | Psych: The Musical is a Detective Show with Broadway Razzle-Dazzle