Creator Steve Franks has made a success out of Psych, the comedy-drama about a private investigator who fakes psychic powers. How to freshen things up after seven seasons? Franks goes for broke with Psych: The Musical, a two-hour, over-the-top Broadway-style episode (Sunday, 8 p.m., USA). That’s right: singing and dancing crime-fighters and let’s-put-on-a-show chutzpah that viewers will either love or loathe. 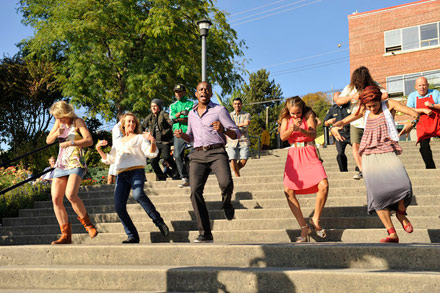 The plot itself is about putting on a show — just the start of the musical’s relentless self-referentiality. A playwright (Anthony Rapp) has escaped from an insane asylum after killing a critic during his last musical production. (I get the point: Critics beware.) Bickering investigators Shawn (James Roday) and Gus (Dulé Hill) track him down with help from a song-obsessed nutcase (Ally Sheedy).

Psych: The Musical is jokey, high-spirited and mostly enjoyable. It occasionally gets too silly for my taste, but it also makes fun of its own silliness. That pretty much renders the production critic-proof.

Just as well, I guess, given the grisly fate that awaits critics of musicals.

This reality series unearths a fascinating subculture: the women who ride fast horses at rodeos. These aren’t pampered Real Housewives — not by a long shot. Our five heroines train hard to win their barrel races. They have to be tough enough to withstand injuries, not to mention demeaning treatment from the male rodeo riders. Their motto: "We live by our own rules and don’t like it when anybody tells us what to do." 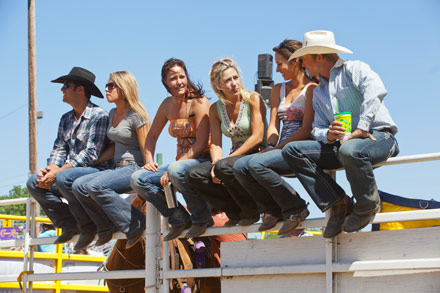 Rodeo Girls is at its best when the women hang together. I enjoyed the scenes of camaraderie around the campfire, as the women joke with each other the night before a big race. I didn’t enjoy the scenes of trumped-up cat-fighting and man-stealing, mostly involving the glamorous Darcy La Pier. Who needs a Real Housewives rerun in cowboy boots? The series should have the courage to diverge from the women-vs.-women clichés of reality TV. 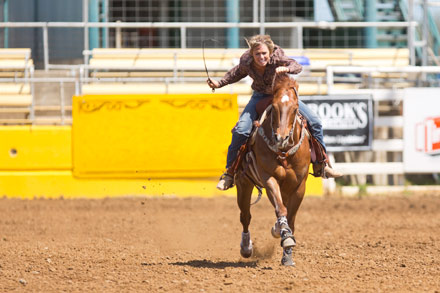 Oops, I forgot that the Rodeo Girls don’t like it when anybody tells them what to do. I’ll just shut up and see where these riders take us during their six-episode run.

It’s the season of soggy holiday programming, dripping with eggnog-flavored cheer. But that’s not what you’ll find on tonight’s episode of The Neighbors, the eccentric sitcom about a human family living amid aliens. Human boy Max (Max Charles) wants a Princess Leia doll for Christmas, so alien neighbor Larry (Simon Templeman) whips up a sexy real-life Leia who will satisfy all his desires. Then alien teen Reggie (Tim Jo) gives his human girlfriend (Clara Mamet) a grotesque, beating clone of his heart, thinking she’ll find it sweet.

This may be the strangest show of the holiday season. But if it’s between soggy and strange, I’ll take the latter.

This special picks up the story of the Sea Shepherds, who sail into Antarctica to protect whales from Japanese fishermen. Leader Paul Watson has been called an "eco-terrorist" for his methods of interfering with the Japanese vessels. But viewers who’ve been watching Whale Wars for five seasons may consider him as a principled conservationist who risks everything for the sake of an endangered species. As he asks potential crew members: "Are you ready to risk your life to save a whale?"

In the two-hour special, Watson goes underground after skipping bail in Germany. Then he returns to the high seas for another mission with new boats and crew members. The problem is that the Japanese have filed a lawsuit against him in the U.S., and a court has imposed strict limits on his activities. If he continues to lead the Sea Shepherds, the entire crew could face prison and financial ruin. Will they stick with him, continuing to risk their lives to save the whales?

Personally, I wouldn’t be willing to risk my life. But I am willing to watch an entire two-hour special about the people who are prepared to do so. I hope the whales appreciate that gesture.

This competition series features hearty souls who specialize in survival: a team of mountaineers, a team of military veterans, a team of endurance athletes and a team of woodsmen. Each team tries to win a race across 1,500 miles of Alaskan wilderness with only the gear on their backs. Against a relentlessly white backdrop, they snowshoe over glaciers, plunge down gullies and fight dangerous rapids. The risks include starvation, hypothermia and wild animals, but oddly, the contestants couldn’t be happier.

"It doesn’t get any better than this," insists a mountaineer named Marty.

Well, I’m sitting here watching cable TV with a warm blanket, a cup of hot chocolate and a box of ginger cookies. Marty, I hate to say it, but I think that’s a lot better than what you’re going through.

Hysterical Preservation, Part V: Which Does Not Contradict What is Known