This year’s Kennedy Center Honors (Sunday, 8 p.m., CBS) celebrates jazz innovator Herbie Hancock, guitarist Carlos Santana, movie star Shirley MacLaine, opera singer Martina Arroyo and pianist Billy Joel for their contributions to American culture. I was going to maintain a discreet silence about the choice of honorees, having tired of making the case for the perennially overlooked Jerry Lewis year after year. But, dammit, the Kennedy Center has gone out of its way to provoke me by choosing Billy Joel over a much more deserving pop pianist: Jerry Lee Lewis, the outlaw genius behind "Whole Lotta Shakin’ Going On" and "Great Balls of Fire."

Sure, Joel had a string of pleasant hits, but how does that compare to helping invent rock ‘n’ roll? To channeling country, gospel and rhythm and blues into a primal wail that changed our culture forever? To inspiring the Beatles, Led Zeppelin and countless other musical titans? To playing the piano so passionately that it sometimes literally caught on fire? Plus, 78-year-old Lewis still has a whole lot of shakin’ goin’ on, to judge by his excellent late-period album Last Man Standing. When’s the last time Joel made your hair stand on end with a new release?

I suspect the Kennedy Center passed over Jerry Lee Lewis for the same reason it passes over Jerry Lewis: a hint of disrespectability. I say, God help American culture if it consisted entirely of respectable artists like Billy Joel.

AMC runs every episode of the now-classic series about Walter White (Bryan Cranston), the high school chemistry teacher turned meth kingpin. The network did the same thing in September, leading up to the much-anticipated finale. Back then, though, we didn’t know how the series was going to end when we watched episodes 1-61. 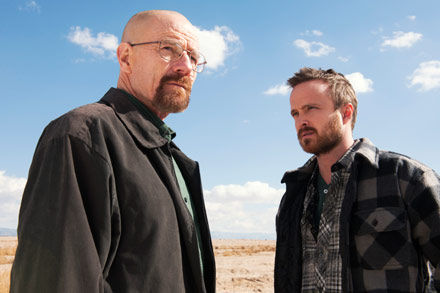 Now we do, and it’s bound to transform the experience of sitting thr
ough the whole run. Episode 62 confirmed Walter as a man rather than simply a monster. It redeemed him as much as possible, given the shred of humanity he still possessed. But it didn’t skimp on just deserts, for him or for the other evildoers in godforsaken Albuquerque. In short, it was a 75-minute masterpiece, establishing Breaking Bad as a tragedy for the ages.

Let’s start again with episode 1 and retrace Walter’s path to what only now seems an inevitable conclusion.

God bless Lifetime for premiering an original movie during a week of wall-to-wall reruns. The title is a conscious echo of Alfred Hitchcock, with the production substituting a Lifetime-appropriate "wrong woman" for Hitchcock’s "wrong man" prototype. Ellen (Danica McKellar) is a normal wife and mother who suddenly finds herself arrested for murder. The evidence appears undeniable, to the point where even her husband begins to believe it. Heck, even Ellen herself begins to believe it, wondering if her memory is playing tricks on her.

Whodunnit? In this week full of shows we’ve already seen, it’s simply delightful not to know the answer.

Set in New Orleans post-Hurricane Katrina, this most musical of series has always taken a Dixieland approach to storytelling: It weaves multiple plotlines into a pleasing polyphony. Appropriately, the series finale occurs during Mardi Gras 2009, in a city rendered phantasmagorical by masks, feathers, beads, percussion and parades.

Treme fans will not be surprised to learn that the sprawling subplots avoid profound conclusions. Pot-smoking Davis (Steve Zahn) toys with maturity; high school music teacher Antoine (Wendell Pierce) plays a gig with Dr. John; violinist Annie (Lucia Micarelli) resists selling out. The idea is not that "the story is over," but that "life goes on in New Orleans."

Given the devastated city we came to know in season one, however, that’s a profound conclusion in and of itself.

When it premiered last month, I called this hospital series "arguably the least enjoyable HBO comedy of all time." I figured everyone would feel the same way about the tale of pathetic doctors and nurses ministering to pathetic terminal patients in the bleakest hospital ward imaginable. Imagine my surprise to see critics falling all over themselves to praise Getting On: "I’ve never laughed so hard" (Slate); "an astonishing gem of a show" (Los Angeles Times); "a brilliant mix of poignancy and hilarity" (San Francisco Chronicle).

Clearly, I needed to give the series a second chance, so I tuned into this week’s season finale. But I have to say, San Francisco Chronicle, I perceived no poignancy and definitely no hilarity as grotesque patient Cordelia (Irma P. Hall) screamed and spit at the nurse giving her a bath. Or as mentally ill Dr. James (Laurie Metcalf) screwed up a woman’s last moment with her dying mother.

This is a would-be black comedy with no comedy, leaving only the depressing stuff. If my fellow critics believe that’s "reason to celebrate," they really need to lay off the premium cable for a while and go out to have some fun.