An icy CEO (Gillian Anderson), a troubled ex-CIA analyst (Dermot Mulroney) and other D.C. parents drop off their kids at an elite high school for a field trip. Before long, the bus is ambushed by criminal masterminds who blackmail the well-connected parents to do their bidding. This could mean the end of the world as we know it, but there’s an even more pressing problem: How will the cool girl (Halston Sage), the disaffected girl (Stevie Lynn Jones) and the nerdy boy (Joshua Erenberg) get along in captivity?

The gripping new series Crisis (Sunday, 9 p.m., NBC) skillfully manages its many cast members, giving each one a touch of characterization. The actors make you feel what’s at stake, whether family ties or personal redemption. The pilot features stratagems, fights to the death, kindness, cruelty and head-spinning twists. By the end of the hour I was a nervous wreck, wondering what I’d do if I were a hostages or a parent. 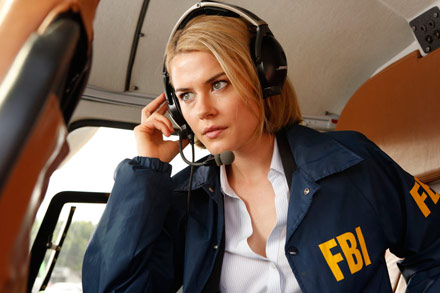 In the midst of the ambush, a brave Secret Service agent (Lance Gross) yells at one of the blubbering kids: "You have to stop crying!"

He couldn’t stop. And I wasn’t doing so well myself.

Homeland wins all the awards, but The Americans is the superior spy series. Season two has brought more complications for the two KGB agents posing as an American couple during the Reagan ’80s. I say "posing," but Philip (Matthew Rhys) and Elizabeth (Keri Russell) have been together since the 1960s and are raising their two children. If that’s not a real marriage, what is?

True, most parents don’t sneak away from the house in disguise to undermine the U.S. military. On the other hand, many do keep secrets from their kids and struggle to relate to one another. Though The Americans deals with Cold War spying, its subtext – family dysfunction – is eternal.

Season two continues to blur the line between the good guys and the bad guys. Elizabeth is not your standard KGB villain, but an idealist who sees the evils of U.S. imperialism. Then again, the fact that she’s now the mother of two sweet American children can’t help affecting her feelings about murder and sabotage for Mother Russia.

This season, daughter Paige (Holly Taylor) gets suspicious about her parents and – a chip off the old block – begins snooping around to find answers. That leads to a darkly comic moment when Philip catches her in the act and lays down the law: "Lying will not be tolerated!"

Parental hypocrisy is rarely so multilayered.

Most sitcoms try to be hip and youthful. By contrast, George Lopez’s new series is content to be a moldy oldie. With Lopez starring as "George Lopez," a recent divorcé on the make, it’s packed with cornball punch lines only a laugh track could love. The lowest-common-denominator humor takes aim at Mexicans, ugly women and the elderly, emphasizing insults.

"You’re fat, boring and stupid!" George’s mother yells at him.

The best I can say is that Lopez doesn’t really look fat.

This season, star lawyer Harvey Specter (Gabriel Macht) tries to keep a lid on the secret that his protégé in the firm (Patrick J. Adams) didn’t really go to law school. On paper that’s a silly premise, but Suits sells it, thanks to solid acting and writing.

As usual, this week’s episode deals with the difference between what’s legal and what’s right. In Suits, the characters tend to choose the latter, bending the law for a higher good.

As the evil businessman J.R. Ewing, Larry Hagman was the main reason to watch the remake of the 1970s-90s soap opera. Hagman died last year, and I thought Dallas might die with him. But season three offers lots of enjoyable secrets and scheming, as J.R.’s son (Josh Henderson) plots to undermine his decent Uncle Bobby (Patrick Duffy).

Without Hagman around, the cast no longer seems so bland by comparison. Henderson, in particular, emerges as a villain ruthless enough to keep us interested. I’d like to think that, somewhere in hell, J.R. is smiling.