Like The Butler, this movie is based on the real-life story of a black man in America. In this case it’s Solomon Northrup, a northern free man in the 1840s with a wife and two children who is kidnapped, taken in chains to Louisiana and sold into slavery. After regaining his freedom, he wrote his book of the same title. His story is a harrowing saga of the cruel, humiliating and terrifying life of plantation slaves in the South. If you do not have tolerance for scenes of brutality and violence, then don’t go see this movie. Director Steve McQueen has crafted a vivid and authentic portrayal of that life, capturing the dusty, sweaty, raggedy look and feel of slave life—the destitution, back-breaking labor and dehumanization, and the blind compliance of a white society that depended economically on slave labor for its wealth.

Not all white men and women are depicted as evil—there are decency and courage shown, but everyone—slaves, masters and free men alike—are embedded in an institution that is evil in itself. Northrup is first owned by a more "humane" master, played by Benedict Cumberbatch, but his undoing on that estate is at the hands of an overseer played by Paul Dano (an amazingly versatile young actor). 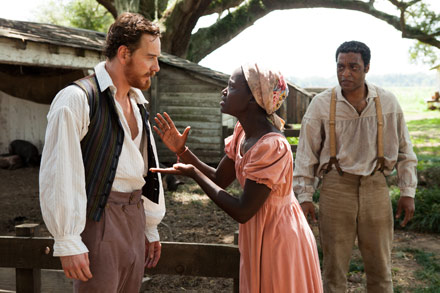 However, the prize for savagery goes to his next master, Michael Fassbender’s mentally unbalanced Edwin Epps, who inflicts his rage on Northrup and his obsessive lust on the pitiable slave girl Patsey, movingly portrayed in all her agony by Lupita Nyong’o (Oscar for Best Supporting Actress). The film also features Paul Giamatti, Alfre Woodard and Brad Pitt. Northrup is played with subtle emotive power by Chiwetel Ejiofor, a British actor who has appeared in numerous films but this is certainly his most memorable role. He presents Northrup’s pretense of humble subjugation and uneducated ignorance while simultaneously showing his struggle to suppress his innate dignity, anger and anguish. Northrup is ever treading a fine line between despair and hope, death and survival, abasement and dignity. Although Northrup’s personal story is one of eventual liberation, this movie, unlike Lincoln or The Butler, offers no redemptive outlook on this shameful part of America’s history.

The Apocalypse, with Acne: Crisis | In Crisis, Criminal Masterminds Use Teenagers to Take Over the World