In the action genre, Liam Neeson has become a staple, and frankly, one of my favorites. Forgive me, but he’s a hulking specimen of masculinity with superb screen power. A little known fact is that Neeson was once offered the role of James Bond, which he declined. Our loss, but I digress. Non-Stop is an airline thriller that puts Neeson, as Bill Marks, on a flight to London facing challenges that only Hollywood could dream up. But it’s Liam Neeson, so I’m in. And here we should emphasize that being a fan is crucial to accepting the precarious story line that unfolds. I’m still in. 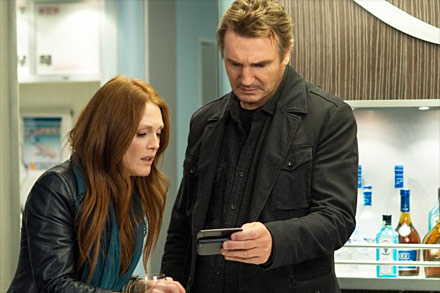 There’s a reason why Marks is on this flight but since the film doesn’t reveal it immediately, let’s call it a business trip. We watch him indulge in a stiff drink in his car at the airport, the image of an unhappy guy. And he’s disgruntled about flying to London. With his day already ruined, he no sooner settles into business class when he starts receiving anonymous text messages from someone who’s threatening to kill passengers unless Marks transfers $150 million into a specified bank account. An impossible task at any altitude, but it all grows more dangerous and mysterious as Non-Stop serves up a plane-load of action in very tight quarters. And while Marks is the victim, underneath it all he seems in charge, which is why we love watching him.

Director Jaume Collet-Serra, who directed Neeson in Unknown, draws a grand performance from the cast that includes Julianne Moore, Downton Abbey’s Michelle Dockery, House of Cards’ Corey Stoll, and Law & Order’s Linus Roache. Most of all, it’s Liam Neeson who delivers. If you don’t think too much and just flow with the non-stop suspense and star power, you’ll get your money’s worth. B