Accomplished actor, comedian, writer, and philanthropist Jim Carrey gave a heartfelt speech to a packed audience in the Golden Dome on Maharishi University of Management campus on May 24, 2014. ï»¿Beloved around the world for his over-the-top humor, Carrey showed another side of himself with a heartfelt, deeply inspired speech sprinkled with many moments of uproarious humor. 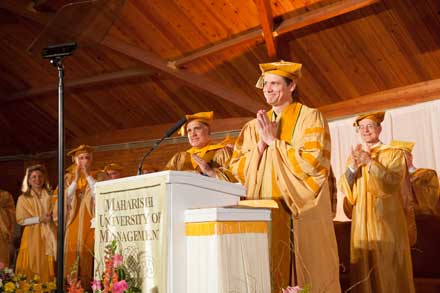 Carrey is warmly welcomed to the podium. (photo by Ken West, ©2014 Maharishi University of Management)

Carrey spoke about his childhood, the influence of his father, pursuing his dreams, and choosing love over fear. Here are some excerpts:

"Now fear is going to be a player in life, but you get to decide how much.ï»¿ You can spend your whole life imagining ghosts, worrying about the pathway to the future, but all it will ever be is what’s happening here, the decisions that we make in this moment, which are based in either love or fear. So many of us choose our path out of fear disguised as practicality. What we really want seems impossibly out of reach and ridiculous to expect, so we never dare to ask the universe for it.

"I’m saying, I’m the proof that you can ask the universe for it. If it doesn’t happen for you right away, it’s because the universe is so busy fulfilling my order." (laughter) 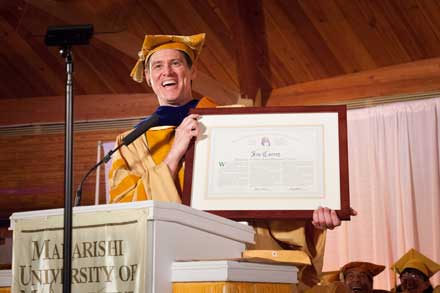 Carrey dropped out of school at age 16 to pursue his dream of becoming a comedian. He lowered his head with visible emotion when presented with an honorary honorary degree of Doctor of Fine Arts Honoris Causa. (photo by Ken West, ©2014 Maharishi University of Management) 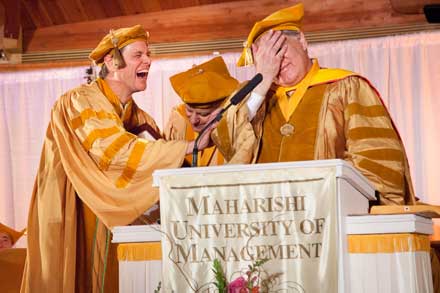 Ever ready with a quip, Carrey joked to President Bevan Morris, "You spelled my name wrong." (photo by Ken West)

On his father: "My father could have been a great comedian but he didn’t believe that that was possible for him. And so he made a conservative choice. Instead, he got a safe job as an accountant. When I was 12 years old, he was let go from that safe job and our family had to do whatever we could to survive. I learned many great lessons from my father, not the least of which was that you can fail at what you don’t want, so you might as well take a chance on doing what you love."

"That’s not the only thing he taught me, though. I watched effect of my father’s love and humor and how it altered the world around me. And I thought that’s something to do, that’s something worth my time." 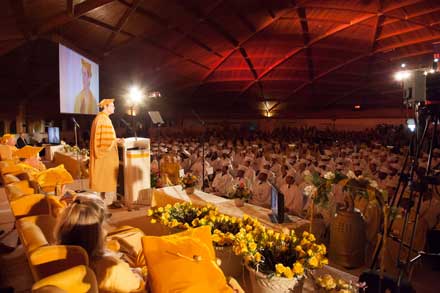 Carrey speaks to graduates in the Golden Dome. (photo by Ken West)

On fulfilling dreams: "As far as I can tell, it’s just about letting the universe know what you want and working toward it, while letting go of how it comes to pass. Your job is not to figure out how it’s going to happen for you, it’s opening a door in your head, and when the door opens in real life, just walk through it. And don’t worry about missing your cue, because there’s always doors opening, and they keep opening. When I say ‘life doesn’t happen to you, it happens for you,’ I really don’t believe that’s true…I’m just making a conscious choice to see challenges as something beneficial that I can deal with in the most productive way." 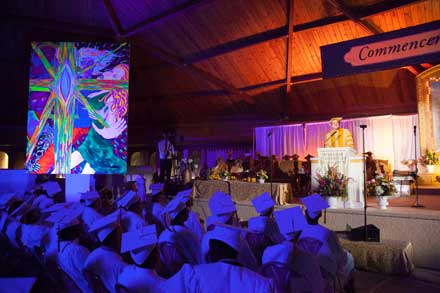 Jim Carrey reveals the autobiographical painting that took him "thousands of hours" to complete. The room was darkened and a black light revealed the painting’s fluorescent colors.

On finding purpose in life: "My father used to brag that I wasn’t the ham, I was the whole pig. And he treated my talent as if it was his second chance. When I was about 28, after a decade as a professional comedian, I realized one night in L.A. that the purpose of my life had always been to free people from concern, just like my dad. And when I realized this, I dubbed my new devotion the ‘Church of Freedom from Concern,’ the Church of FFC. And I dedicated myself to that ministry.

"What’s yours, how will you serve the world? ï»¿What do they need that your talent can provide? That’s all you have to figure out. As someone who’s done what you’re about to go and do, I can tell you from experience the effect you have on others is the most valuable currency there is. Because everything you gain in life will rot and fall apart and all that will be left of you is what was in your heart."

"Look where I am, look what I get to do. Everywhere I go—I’m going to be emotional, because when I tap into this, it really is extraordinary to me—I did something so that people present their best selves to me wherever I go."

"I’ve often said that I wish people could realize all their dreams and wealth and fame, so that they could see that it’s not where they’re gonna find their sense of completion. Like many of you, I was concerned about going out into the world and doing something bigger than myself, until someone smarter than myself made me realize that there is nothing bigger than myself. My soul is not contained within the limits of my body, my body is contained within the limitlessness of my soul."

"Risk being seen in all of your glory." 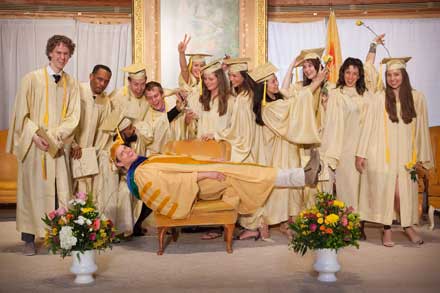 The Lunchbox | A Lovely Little Film, Like a Satisfying Meal

X-Men: Days of Future Past | Can the Future be Changed?