Shara Worden performs at the Mill in Iowa City on November 16, 2014.

In the cool indie music world, Shara Worden, a.k.a. My Brightest Diamond, luminously shines at the top. The classically trained vocalist has successfully collaborated with noted experimental visionaries such as David Byrne, the Decembrists, Laurie Anderson, and Sufjan Stevens. Her own records have been critically acclaimed by a range of reviewers from hip websites like Pitchfork and alternative weeklies like The Village Voice to more traditional publications including The New York Times and the New Yorker.

But most people do not realize Worden was once an Iowan. She spent her junior year of high school in Altoona, where her father worked as a music minister at Berean Assembly of God Church. “He was in charge of leading the singing and organizing the choir back in 1991,” Worden said over the phone from Brooklyn, NY. “He got fired from that job. It’s complicated; my dad is not a cheerleader and they were looking for music cheerleaders back in the early ’90s. Churches were co-opting musical theater styles and mega-churches were happening.” Her father was into a more localized community approach.

While Worden’s Iowa experience may have been a short one, what happened in Altoona was not uncommon. “I lived in nine different states by the time I was 18 years old,” Worden said. Her father had a knack for getting canned. “Poor dad. He was trying hard to provide for his family and doing what he loved,” Worden said. “They expected him to be somebody he wasn’t.”

She considers her father a musical genius and expressed great admiration for him. Not long after his Iowa experience, he began to study computers and changed careers. His daughter said he was much better off dealing with screens than with church authority figures. 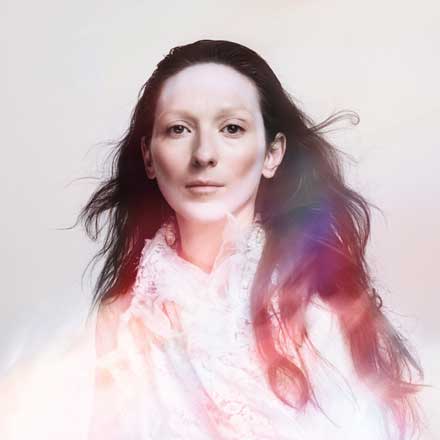 Worden did not mention if she was in the marching band while in Iowa, but it would seem likely in light of her recent album, This Is My Hand. The opening track, “Pressure,” begins with a rousing drumline from the Detroit Party Marching Band before Worden lets loose with her distinctive vocals. The mix of traditional and avant-garde styles is bracingly rich and evocative. There’s something familiar and strange simultaneously going on. Worden said that just like her dad, she finds pleasure in the communal act of music, and that a marching band and a church choir are not that different.

“I am bringing a drummer and bass player,” Worden said about her November 16 Iowa City (The Mill) gig: My Brightest Diamond with Dosh & Ghostband. “At some of the cities on our recent tour, people that were in marching bands in high school and college had networked over social media and Craigslist and joined us. . . . We’d love it if there were a local marching band in Iowa that wanted to perform with us.” She asked me to spread the word.

The emphasis on breaking down the barriers between the artist on stage and the audience is something relatively new for Worden. “When I started out, writing songs was a way to process my life,” she said. “The more I do this, the more I am interested in not just in telling my own story, but with the interaction with others.”

She further explained, “Music gets through to us on a very deep level and brings us together. It makes us not feel alone.” This human experience is the main impetus for the change in her approach.

But not everyone can play an instrument and join the band. That’s okay, because Worden has also put an instructional dance video on YouTube for the song “Pressure.” It shows the appropriate steps and gestures for the song. The clip says to “Watch this video on repeat until you have the moves down, then check the tour dates for your city, and show them off.” The infectious music makes it difficult not to keep hitting repeat.

“Music is so much about connecting with people, whether one is playing a sax, singing along, dancing, or clapping,” Worden said. She explained that there was something tribal about making music together that we seem to have lost from our daily lives, unless one is a musician. Worden recognizes the importance of working with other performers. Besides the artists mentioned in the lead paragraph, she’s collaborated with lots of different artists from a host of genres such as Pulitzer Prize-winning composer David Lang, British deejay Fatboy Slim, freak folkie Bon Iver, and the gospel Blind Boys of Alabama.

Worden would not identify a favorite partner with whom she’s worked in the past, but she did make sure to mention a certain group of players: her family. “My mom—a pianist and organist; grandfather played guitar; all of my aunts and uncles were musical, and I told you about my dad,” she said, and explained that performing together was always exciting. Worden expects the same thing to happen at her show. That the thrill of being part of the concert will just make it a mutually beneficial event for all involved. After all, she is a fellow Iowan.