Lori Belilove and company perform "The Marches!" at the Alley Citigroup Theater.

If you’re like most people, you have a vague notion of Isadora Duncan as a free spirit and the Mother of Modern Dance. Wherever Isadora Duncan performed, she created an immediate sensation in the Victorian society of her times. Shunning the strict confines of ballet to listen to her inner teacher, she created a wholly original dance form that reflected the freedom of her own soul.

With flowing costumes, bare feet, and loose hair, Isadora was inspired by the ancient Greeks, the music of classical composers, and the elements of nature, such as the wind and the sea. “To dance is to live—what I want is a school of life, for the riches of man are in his Soul and his Imagination,” she wrote. And she advised her students, “You were wild once. Don’t let them tame you.”

At one point, Isadora’s vast dance repertoire was in danger of being lost to future generations. Fortunately, the Duncan tradition is alive and well today in the form of Lori Belilove, who at an early age studied directly with Isadora Duncan’s students and has devoted her life to performing in the Duncan tradition.

Hailed as the living embodiment of Isadora Duncan by the international dance community, Lori is the leading dancer in the award-winning PBS documentary Isadora Duncan: Movement From the Soul. As the founder, artistic director, and choreographer of the Isadora Duncan Dance Company & Foundation based in New York City, Lori and her troupe are considered the pre-eminent Duncan dance company performing in the world today. 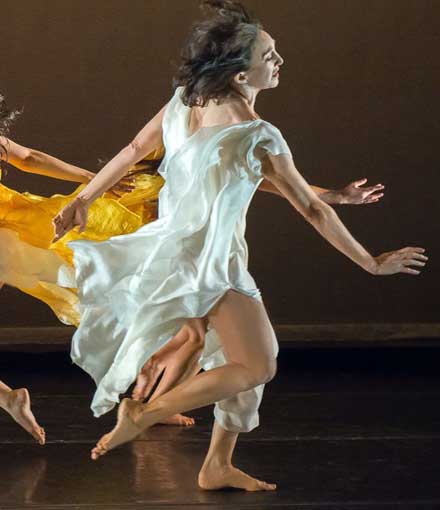 Now Lori Belilove & the Isadora Duncan Dance Company are coming to Fairfield for two rare performances on November 15 and 16. The “Forever Isadora” performance will introduce not only the history but also the authentic recreation of Isadora Duncan dance.

Lori’s journey as an artist and preserver of the Isadora Duncan legacy began when she was barely a teenager. Like Isadora, Lori grew up in the San Francisco Bay Area with a natural talent for dance, but ballet didn’t fit. Her free-thinking parents nurtured her love of the arts, taking their family on an extended tour of Europe during the 1960s. While in Athens, the Beliloves were introduced by chance to Vassos Kanellos, a prominent Greek dancer and painter who had been personally trained by Isadora Duncan.

“Lori was only 12, but she asked so many intelligent questions that Vassos said, ‘Lori, you must be the next Isadora,’ ” remembers Lori’s older brother Jim Belilove, co-founder of Fairfield’s Creative Edge and former owner of the Fairfield Art of Dance studio with his wife Ginger.

Upon returning home, Lori immersed herself in My Life, Isadora’s autobiography.  “I think that I understood Isadora in a way that is perhaps uncanny,” says Lori. “I immediately felt connected to her spirit and passion for life, but more than anything else, I wanted to find her dance.”

In her search for Isadora’s spirit and way of dancing, Lori took modern dance classes until graduating from high school, when she convinced her mother to return with her to Greece. For two years, she studied intensively with Vassos Kanellos, who passed on the techniques that Isadora Duncan had taught to him.

After returning to the Bay Area to pursue dance, religion, and classical studies at Mills College, Lori continued to study Duncan dance.

Lori emphasizes that she did not study or learn this work from books, photographs, or film. “The Duncan tradition was handed down to me through first- and second-generation Duncan dancers,” she says.

With her amazing combination of passion and luck, Lori was introduced to Irma Duncan and Anna Duncan, who were among the six adopted daughters of Isadora Duncan, known as the Isadorables.

“Isadora had chosen these women to tour and perform with her,” says Lori. “They were the living embodiment of her work. So it’s very exciting if you think about all that.”

Soon she was performing the same dances that Isadora had performed.

The Essence of Isadora

What sets Lori Belilove apart is not only her passion and unwavering dedication to performing Isadora Duncan dance, but her ability to create anew from her own wellspring of creativity and inspiration inside, her own untamed inner landscape that is the true essence of Isadora Duncan dance.

“Something came alive in me as I was studying,” she says. “I reached an aha moment when all the fragments of the teachings I had received unified in me. I could embrace her work and make it mine—it was an experience of artistic synthesis that has remained with me ever since.” 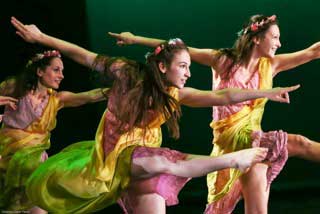 Dancers from the Isadora Dance Company

Isadora herself described her dance as a natural phenomenon—not an invention, but a rediscovery of the classical principles of beauty, motion, and form. She wrote, “The dance is an expression of an individual soul, of its deepest understanding and personal power. Imagine a dancer whose body dances in accordance with the music heard inwardly, in an expression of something out of another profounder world. A truly creative dancer, natural but not imitative. Speaking in movement . . . out of something greater than all selves.”

Although Isadora’s dance was deeply personal, she was also interested in being a conduit for great ideas. “Her works are timeless expressions that speak to universal issues of humankind, from sorrow, loneliness, compassion, pain, and death to resurgence,” says Lori. “Some of her dances are exquisite expressions of human joy.”

Like Isadora, Lori includes teaching and education in her life’s work. Since establishing the Isadora Duncan Dance Company & Foundation in 1980, Lori has ceaselessly continued the work of preserving, teaching, and performing Isadora’s dance in its original form.

The program for the “Forever Isadora” performance in Fairfield traces the life and art of Isadora Duncan between 1900 and 1924, showcasing 14 rarely seen solo and group dances of inner peace, strength, and light, interspersed with voice-overs taken from her own words.

Staged by Lori, the dances include early lyrical pieces set to Chopin and Schubert,  dramatic works like Marche Heroique set toTchaikovsky, and later revolutionary dances. Fairfield pianist Paul Jones will play the poignant Scriabin Etude in C# Minor to accompany “Mother,” the tragic solo Duncan created following the death of her children. Kids from the Fairfield community will join the company in selected performances.

Those who have seen Lori Belilove and her company perform can attest to their power and radiance. “It’s not just another night at the theater, but something from another world,” said a critic for the New York Times. “Their dazzling blend of energy and fluid grace will take your breath away,” said the Dayton Daily News.

Many Fairfielders will remember Bobby Dreier, who studied with Isadora Duncan as a young woman. Bobby, a progressive thinker all her long and eventful life, confided to me that she didn’t think many people understood the real Isadora.

Yet when she attended one of Lori Belilove’s performances during the 1980s, Bobby was so moved she stood up and cried, “Just like Isadora!”

Lori Belilove & the Isadora Duncan Dance Company will perform on November 15 at 7:30 p.m. and November 16 at 3:00 p.m. at the Sondheim Center for the Performing Arts in Fairfield. Tickets may be purchased at Fairfieldacc.com or at the box office (641) 472-2787.

Lori Belilove will speak at ICON Gallery in Fairfield on Thursday, November 13, at 7:30 p.m.

Linda Egenes is a freelance writer and author of five books. Visit her blog at lindaegenes.com.