In the maker space at Maharishi School, kids get to choose their own projects and figure out how to make things.

Take a tour of Maharishi School in Fairfield, and you may run across an unfamiliar sight, something you don’t remember from your days as an elementary school student. It’s a room called the maker space, and it doesn’t look like any classroom you’ve seen before.

The floors are an eyepopping mixture of cheerfully colored tile, the walls are brightly painted and decorated with racks of tools. There are no desks, just work stations full of children deeply absorbed in  different projects. Kids are programming robots, sewing, building with Legos, woodworking, disassembling electronic appliances, making models out of recyclables, and talking excitedly about their work.

It’s a “do-it-yourself” workshop where students come to build creations of many different kinds. The room is the brainchild of Lower School Director Laura Bordow, who learned about the concept while at an Independent Schools Association of the Central States conference.

“I heard the keynote speaker, the editor of Maker magazine,” Bordow recalls, “and it was one of the most inspiring talks I’d heard in many, many years. He talked about maker spaces, and I’d never heard of the concept before. I just loved the idea of creativity, innovation, and children being self-sufficient in the space.”

By allowing this choice, kids are more motivated to set their own goals and learn  hands-on lessons through experimentation, teamwork, and trial and error. Teachers are there to show students how to properly use tools and occasionally give guidance, but project ownership belongs to the children. 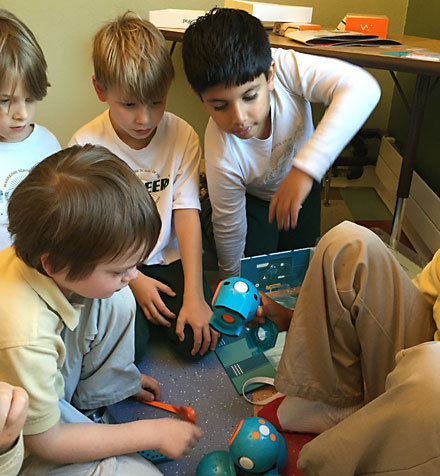 When kids do the work themselves they really learn the process.

Maker spaces also offer a solution to the quandary of how to teach students what are known as the “soft skills”—critical thinking, communication, collaboration, and creativity—in an academic environment. In addition, teachers strive to convey that the only failure in the maker space is the failure to try.

“One of the concepts I want to teach is that we’re not always going to be successful the first time,” Bowdow says. “That people need to persevere, that things don’t happen right away. Sometimes a project takes a long time and a lot of work. . . . I think it’s very important that they learn it’s about the process.”

This lesson came to the fourth, fifth, and sixth grade girls when they had an opportunity to sew whatever design they imagined out of felt, LED lights, conductive thread, and a battery, so that it would light up. “It was very complicated for the kids,” Bordow explains. “They just struggled through it. They had to learn about positive and negative circuits, about circuitry, and how the thread led from one light to another.”

The teacher was there to explain the science and offer encouragement, but still many students rebelled against the protracted effort. “A lot of them said, ‘I don’t want to do this anymore.’ However, we wanted them to figure it out, and they could, and they did. They were just so much happier in getting through it. When the first girl got her three little LED lights to light up, everyone cheered!”

Ultimately, only 80 percent of the girls succeeded in lighting up their LEDs, but Bordow feels even that outcome is a positive one. “If they’re not doing it themselves I don’t think real learning is taking place. The real joy comes in doing it. The biggest part of the maker space theory is doing it yourself.”

So what’s next for the maker space? This year Bordow hopes to expand possibilities in the woodworking, tinkering, and sewing areas by inviting volunteers to demonstrate tool use and technique, and offer guidance to students ready to take on more complex projects.

If you think this sounds like fun and would like to volunteer with the kids one or two hours a week, please email Laura Bordow at lbordow@msae.edu.

The Art of Charlotte Cain | Retrospective Opens at ICON Gallery