I remember the first time I got excited for a Super Bowl. It was 1999, and all I knew going into the game was that some kid named Tim Dwight from Iowa City had been ripping off long kick returns for the Atlanta Falcons. Had it not been for Dwight, I probably wouldn’t have cared.

But I did. We were visiting family in New York, and I prepped for their Super Bowl viewing party by getting out my crayons and drawing their cats in Falcons and Denver Broncos gear. The game itself wasn’t great, but I was hooked by the atmosphere in my aunt and uncle’s cozy little apartment. I found the magic in gathering together to share food, warmth, and laughter as the snowy world went by outside. Football was the catalyst.

These days, I prepare for the game a little differently. The crayons are gone, having been replaced by glittering chef’s knives. I spend less time on the couch than I do pirouetting around my kitchen, glazing lamb meatballs with pomegranate balsamic or frying the tortilla chips in the Persian lime-infused olive oil that serves as the perfect foil for my serrano-peach salsa. I want to help my guests discover the magic for themselves. And maybe, just maybe, my nephew will show up on a blustery Super Sunday with a drawing of my cat wearing the colors of my beloved Detroit Lions.

Heat about 1 inch of oil in a large, heavy skillet over medium-high heat until an oil thermometer reads 350 degrees. Cut tortillas into six or eight equal pieces each. You can accomplish this most easily by stacking them on top of each other and slicing through them with a pizza cutter.

Fry a handful of chips at a time, moving them around with a slotted spoon periodically, until golden and crisp, not quite a minute. Transfer chips to a paper towel-lined plate to drain, and sprinkle with kosher salt to taste. Allow oil to come back up to temperature between batches.

4 large, ripe peaches, halved and pitted (and peeled, if desired)

Make chips: Heat about 1 inch of oil in a large, heavy skillet over medium-high heat until an oil thermometer reads 350° F. Cut tortillas into six or eight equal pieces each; you can do this most easily by stacking them on top of each other and using a pizza cutter. Fry a handful of chips at a time, moving around with a slotted spoon periodically, until golden and crisp, not quite a minute. Transfer to a paper towel-lined plate to drain, and sprinkle with kosher salt to taste. Allow oil to come back up to temperature between batches.

Make salsa: Heat a grill or grill pan over medium-high heat. Brush peach halves liberally with Cilantro & Roasted Onion Olive Oil, and grill for 2 to 3 minutes a side until deep grill marks appear in the flesh. Allow to cool before chopping into small pieces and tossing with the chili, vinegar, salt, and cilantro, if using. Use a wooden spoon to mash the peaches until desired consistency has been reached. Taste, adjust seasoning as desired, and serve with chips or as a topping for grilled pork chops or fish. 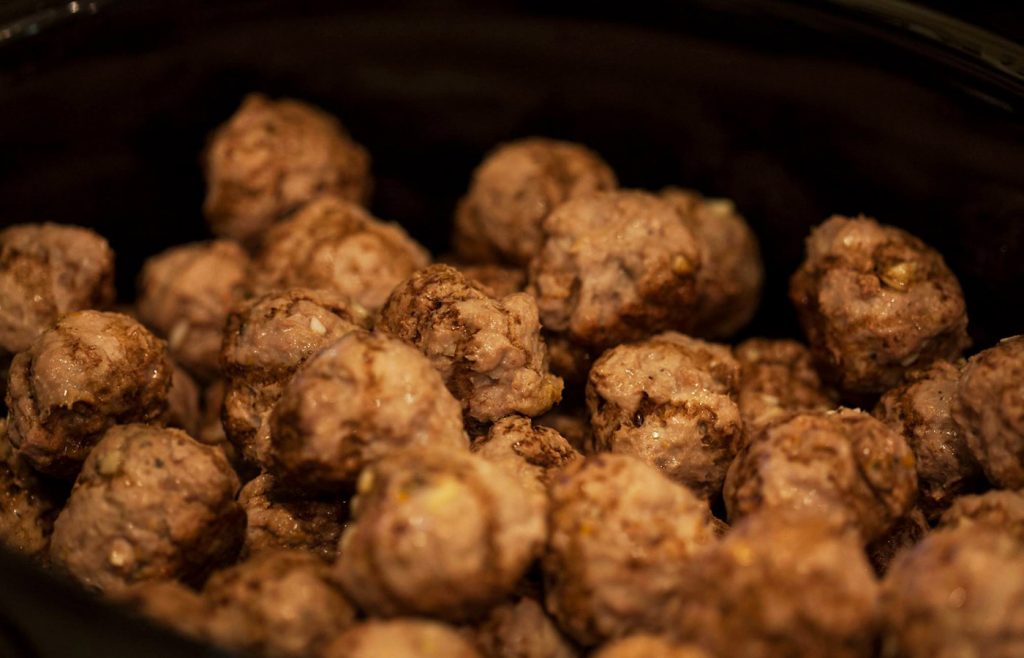 Make reduction: Heat Pomegranate Balsamic in a small saucepan over medium heat. Bring to a boil, reduce heat to low, and simmer, stirring occasionally, until vinegar has reduced by at least half, or until desired consistency and sweetness has been reached. Set aside.

Heat broiler and set a rack as close as possible to the heat source. In a large bowl, mix together lamb, garlic, orange zest, salt, and pepper and knead to combine. Form into 1-inch meatballs; aim for 20 to 24 individual balls. Transfer to a foil-lined baking sheet and brush liberally with Wild Mushroom & Sage Olive Oil.

Run meatballs under broiler until golden and cooked through, 5 to 10 minutes. Remove from oven and immediately drizzle with pomegranate reduction. Scatter chopped mint over the meatballs if using, spear with toothpicks, and serve.

Game Day Punch for a Crowd

Sweet sparkling wine (optional, as a replacement for club soda)

Combine juices, balsamic vinegar, and club soda in a large serving bowl and stir. Garnish if desired, and allow guests to serve themselves.

Seth Roberts is the Assistant Manager of Harvest Oil & Vinegar in Coralville. HarvestOilandVinegar.com.

Winning Short Story Collections from the University of Iowa