Fairfield residents Lenora Boyle and Steve Boss have organized a rare cultural and charitable opportunity this Saturday, June 1, when the Orpheum Theater will present two screenings of the recent, highly acclaimed film, Arrangiarsi (pizza … and the art of living) created by Matteo Troncone.

In addition to bringing a major new film and its creator to Fairfield, 50% of ticket proceeds will go to the Lord’s Cupboard for their L.O.A.F. initiative, a critical outreach program that provides meals for Fairfield children during the summer.

Organizer Steve Boss says, “You may not be aware that 50% of the students in the Fairfield community school district qualify for free food during the school year because their family’s income is so low. This figure is astounding to me. The L.O.A.F. program bridges the gap in the summer and insures the students don’t go hungry.”

Equal parts documentary, travelogue, and personal love story about Naples, Italy, Arrangiarsi (pizza . . . and the art of living) was created by writer, director, cinematographer, editor, and star Matteo Troncone. With a sudden burning desire to trace his roots and learn the secret of Neapolitan pizza, he embarks on a journey that will teach him much more. In Naples, he meets a colorful crew of characters—from street artists to pizza makers—who are finding a way to live and love in the most joyful ways—regardless of their circumstances. In this vibrant, rough and tumble city, he discovers the art of making something from nothing: Arrangiarsi.

I had the pleasure of interviewing Matteo Troncone over the phone on Wednesday afternoon as he prepared for a major screening at Chicago’s historic Music Box Theatre.

Where Did the Idea Come From?

“I was on holiday in Italy when I had the aha moment,” he told me. “It was truly the pizza. It’s that good.”

Matteo didn’t go to film school. “I didn’t know what I was doing at all, and that was one of the greatest gifts. . . . Everything was wide-eyed and innocent, so I didn’t have a big agenda. I could just be led by serendipity.”

It should be noted that Matteo is a foodie with Italian heritage. He was living out of a VW van in San Francisco and wasn’t working a traditional job—a lifestyle that would allow him to devote everything he had to making a film about something he loved. As a photographer with a background in acting, his gift for storytelling—visual and otherwise—would come in handy.

“I was only going to make a film about pizza,” he said, but two weeks after shooting began, a friend looked at some of the footage and said, “You know, you’re really not making a film just about pizza, you’re making your film about arrangiarsi.” He laughed, “She ended up knowing what the film was about before I did.”

What is Arrangiarsi? Simply put, it’s the art of making something from nothing. We’ll come back to that.

“And the city of Naples is so unique I knew I had to do something there creative-wise. It’s busy and frenetic and creative and crazy and sexy and vibrant,” Troncone enthused, adding, “and I always root for the underdog, and Naples has had a bad rap for decades. A lot of Americans go [to Italy] and they go to Capri, or they go to the Amalfi Coast, but they don’t want to spend time in this rough and tumble place. But there is so much history there . . . its so alive, that place is so alive.”

But the film is also about the journey of Matteo Troncone himself, something he resisted for a long time. “It’s this post-modern crazy example of the filmmaker living the subject of the film,” he laughed. “I didn’t want to put myself in it or have anything to do with me in the film for the longest time—I didn’t want to be a narcissistic guy, you know, ‘it’s all about me.’” But what he was discovering about the people of Naples began taking shape in his own life, and it seemed a natural direction to take. “There’s arrangiarsi throughout the film—of street artists, and all kinds of examples—but the most intimate example was perhaps the filmmaker himself.”

Troncone made nine trips to Italy to make the movie, and three of those months he spent living in a tent. As is printed on his film posters, “There is always a way.”

Arrangiarsi wasn’t a word or idea Troncone was familiar with until recently, not even his Neopolitan father had heard of it. But he saw it being lived and breathed during the course of making this film.

“What does arrangiarsi mean to you?” I asked.

“It’s the art of being resourceful,” he said. “My favorite definition is ‘the art of overcoming an obstacle.’ Some people say it’s the art of making do, or the art of getting by. I prefer a more positive spin on it. . . . These people, they’re not just surviving. They’re thriving.”

“The masters of arrangiarsi are known all over Italy as being the Neopolitans. Of course they’re also known as the masters of pizza making,” he said reverently. “Pizza is just flour and water, it’s food for the poor, it’s the perfect, beautiful, and perhaps most ubiquitous example of arrangiarsi. In fact, when tomatoes first arrived from Central America, they didn’t even know what to do with them in Italy and so they started to put them on this thing called pizza. It all kind of works out, you know.” Something from nothing.

For a dish that was born to feed the poor, every part of making a Naples-style pizza is so specific! “Is it true with every ingredient?” I marveled over the phone, “and is that really necessary?”

“Oh, yes.” Troncone replied. “By law, to be a certified Naples pizzeria, you have to use certain tomatoes, you can use two types of cheese—you can use buffalo mozzarella or the fior di latte, which is from a cow. Even the way you put the tomatoes on the pizza—and this is a little crazy—it has to be clockwise. It cannot be cooked for more than 90 seconds, you have to use a zero zero flour, of course—there are a lot of specifications as it were.”

A zero zero flour has a very, VERY fine grind, but also a high enough protein content that can support the structure of a dough which (by law!) must have a minimum rise time of eight hours. Troncone explains that most pizza makers worth their salt will do a “double rise,” a fermentation process that lasts 16 to 24 hours.

Wait, back up. “Did you say a 90-second cooking time?” I asked. I’ve suffered through a much longer bake time when I’ve made pizza at home in the oven.

“Pizza was actually born in Naples somewhere in the 1600s,” Troncone tells me, “and one of the reasons why they started the oven temperature so high, about 900 degrees Fahrenheit . . . was because the water wasn’t safe in Naples to drink.” So out of (life or death) necessity was born the perfect pizza crust.

By contrast, the traditional Roman pizza crust, cooked at a much lower temperature, is more brittle, crunchy. Which of course the Neapolitans make fun of, Troncone informs me. “The Romans don’t eat pizza, they eat crackers,” he jokes. “It’s antithetical to pizza Napoletana,” he adds, which explodes not only with flavor, but “a sense of softness, tenderness, and moistness. There is no pizza on earth like that which you will find in Naples,” he says.

Should We Bother Trying?

That said, Matteo has eaten pizza in the U.S. that comes pretty close. For instance, Jonathan Goldsmith’s Spacca Napoli in Chicago was just voted Best Neapolitan Pizza in the World. “In Chicago!” Troncone says, “It’s crazy—it’s really good.” His other favorite pizza this side of the Atlantic is the Flour House in San Luis Obispo, California. “It’s by far the best pizza in all of California, the closest thing you’re ever gonna get to Naples. It’s off the charts.”

“So it can be done,” he comments. “Which was one of the motivations behind the film—can anybody actually recreate this? And I would say that the answer is no and yes. I mean you kind of can, but you can’t really recreate anything because there’s the energy of Naples, there’s the people there, there’s the soul of the city . . . there’s the air, which has different bacteria compared to Chicago or whatever.” You know you’re serious about food when you’re interested in air bacteria.

See the Film, Meet the Filmmaker

Things lined up for the Arrangiarsi screening at the Orpheum Theatre in Fairfield in a similar fashion as the film itself—with a certain kind of synchronicity. Through the friend of a father of a friend, it all fell into place. “I’m really looking forward to screening with you all because of the kizmet,” Troncone says. 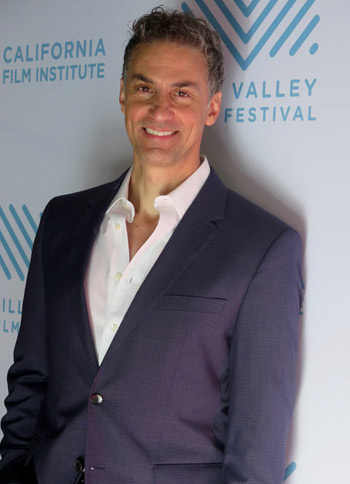 “People really love the film, there’s been an incredible response,” he says. “It keeps me going, because what I’m doing is certainly not for the faint of heart. My work as a human being, and really this is the message of the film ultimately, the message for me at least, is to trust. To trust my life and trust the friendliness of the universe.”

Matteo Troncone’s Arrangiarsi (pizza … and the art of living) will screen at 2 p.m. and 7 p.m. on June 1. Troncone will stay for a Q & A after each show.

The Orpheum Theater is located at 121 W. Broadway. Tickets can be purchased in advance at the At Home Store, 52 N. Main St., on the west side of the square. Tickets are $10 in advance, $12 at the door. The film is 91 minutes long.

Got a Great Idea? Put It into Action at Changemakers Event on June 8