In 2018, Andrea Wilson, founder and executive director of the Iowa Writers’ House in Iowa City, launched an ambitious project. The organization put out a call for applications from writers who live in Iowa and come from backgrounds or cultures not represented in the stereotypical vision of who an Iowan is.

The result was We the Interwoven: An Anthology of Bicultural Iowa, a collection of work by Sadagat Aliyena, Melissa Palma, and Chuy Renteria (full disclosure: I work with Chuy at Hancher Auditorium and wrote a letter of recommendation for him when he applied for the fellowship). 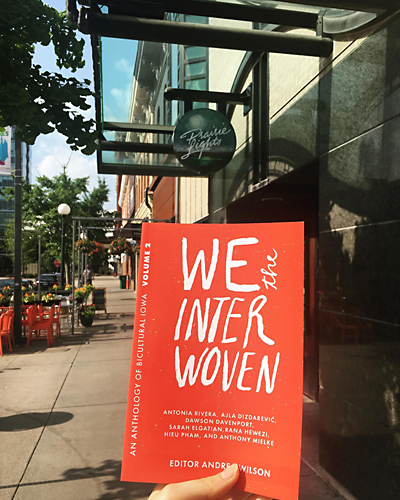 The second volume of We the Interwoven was released this summer and features writing by Antonia Rivera, Ajla Dizdarevic, Dawson Davenport, Sarah Elgatian, Rana Hewezi, Hieu Pham, and Anthony Mielke. Both books offer readers the opportunity to reimagine what it means to be an Iowan—and a participant in the unfolding story of America.

Wilson acknowledges that including more writers presented challenges. But it also created important opportunities. “The fact that we decided to publish seven writers versus three was a big change for us from the perspective of how many different people we were working with to try to help them craft their story,” she says. “But also because of the nature of this project, [this enhanced] literally the number of lives we were helping document and the emotional weight for all of us in co-creating this book.”

While the first volume includes some fiction, the new book is centered on personal narratives.

“In the second year we really decided to focus on true-to-life stories,” Wilson says. “The stories are powerful in that they’re true.”

Although the number of actual fellows (individuals who participate in an intensive residency at the Iowa Writers’ House) stayed steady at three, the second volume includes work from four additional writers not selected to dive into the full program.

“What we realized was that if we received essays in year two that we felt were within reach of becoming a final story for the book, the public and Iowans would benefit from more stories,” Wilson explains. “So in year two we added an honorable mention component which essentially said, if we awarded that honorable mention, we would provide editing as the award experience versus writing mentorship.”

In the final publication, the pieces by the fellows range from 15,000 to 20,000 words, while the essays by honorable mention winners are closer to 2,000 words. Wilson is quick to point out the differentiation between the selected fellows and the honorable mention writers was not necessarily about strength of craft so much as the potential depth of the story being told.

In two cases, Wilson herself stepped in to collaborate with this year’s fellows, asking questions, transcribing the answers, and helping to define richer story arcs. The tight timeline of the book’s production, driven by grant requirements, led to these collaborations, closing the gap between the strength of a writer’s story and that writer’s adeptness at penning their story under tight deadlines.

“Our fellows were part of, I would say, more marginalized populations and were also working with more raw subject matter,” she says. “We asked them to explore that deeply, and the kind of commitment that takes in time is really considerable. I think there was some learning on our end. The fellowship is an opportunity to gain writing skills and to learn in an interactive and dynamic environment, but it takes a real dedication from those awarded the opportunity to take advantage of it.”

The program’s funding from the Iowa Arts Council has been renewed for a third year in the form of a $10,000 grant that the Iowa Writers’ House must match. Wilson has aspirations to do even more this coming year. She hopes to take the writers around the state for events and would love to find ways to reduce or eliminate the cost for libraries and community centers to include the books in their collections.

“We feel like it is an incredible achievement alone to create the art, but also this is working art,” she says. “People need to read it. They need to get it in their hands, and we want to make that more possible. . . . What we’re considering is a sponsorship of a chair within the fellowship that we would offer up to various cultural and community groups around the state that believe in the importance of education on immigration and the opportunities of multicultural societies.”

In the third year, Wilson plans to tighten the focus to a single story from each writer. Those pieces may be fairly short to begin with, but through the process may grow to between 5,000 and 10,000 words.

“The fellowship is about helping them expand and develop that [application] story,” Wilson explains. “We need to be able to see a demonstration of both their writing chops and the extent of the story they’d like to explore.”

Applications for the third round of fellowships will opened on October 1, 2019.

Linda Ronstadt: The Sound of My Voice