Note: Penland’s work is currently published under the name Alexandra Penn. Since publication, however, Penland has rethought that traditionally feminine appellation and begun using they/them pronouns.

A mysterious illness and a great idea came together for Alex Penland, and The Letter Mage series—a young adult space saga that problematizes questions of good and evil—was launched in installments on Patreon and then self-published in four novellas. Penland, who is on hiatus as they pursue graduate studies in creative writing at the University of Edinburgh, approaches their work with philosophical rigor that never upends the storytelling. I first met Penland at an indie book event in Cedar Rapids prior to their move to the UK. Due to the distance and time difference, this interview was conducted via email.

Rob Cline: Tell me the origin of The Letter Mage. How did you go about creating the full universe and plot?

Alex Penland: The Letter Mage has about three different origin stories, all of which are equally true, so bear with me. 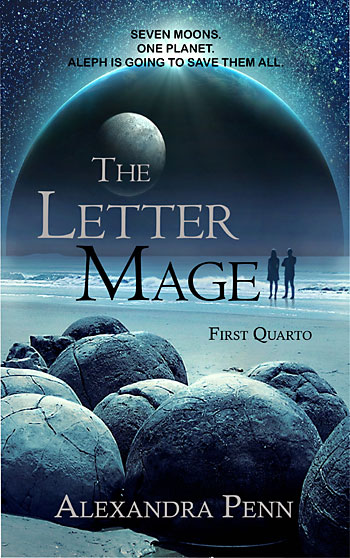 The world has been swirling around in my head for years. My parents worked for the Smithsonian museums while I was growing up, and so my childhood was spent in this sprawling interaction of different scientific disciplines. (One of my earliest memories is of playing with cameras at the National Botanical Gardens, and I have it on good authority that I spent some time in preschool lugging a stuffed Pumbaa around Natural History looking for his taxidermied counterpart.) So I’ve drawn a lot of the little absurdities and details from those experiences.

The magic started off true to its name, with its alphabet. Back in 2016, I attended a writers’ conference session on magic that included a bit about sigils, and within a week I had sketched out the first drafts of what would become the system of sigil magic that Aleph grew up with. Once I had a general idea of how I wanted to handle magic in the larger world (loose rules based off real-world magics and real-world sciences), the rest just clicked into place.

The third origin story (the plot) kind of happened on its own. I originally tried to write this story as a NaNoWriMo (National Novel Writing Month) project, but after a few false starts I admitted defeat when it came to the traditional novel format. Aleph was originally much younger, and the story started with (spoiler alert) a murder which now occurs at the end of the Second Quarto. It took a couple months for Aleph’s character to coalesce properly in my head, and I didn’t actually get the plot together until I sat down and the first sentence of the book just kind of happened: “I didn’t set out to be a supervillain.”

Aleph then revealed in the second sentence that his love interest was the actual protagonist, and that Aleph himself—this sweet little dorky kid I’d been creating over the past year or so—was actually mildly genocidal under the right circumstances. Oops. But once I had that right, the entire series plotted itself out in about five hours.

This is why I said “about” three origin stories in the last section. Here’s Origin Story Three-and-a-Half.

About a year after I came up with the magic system, and a couple months after I failed at writing this book for NaNoWri Mo, I managed to get on the wrong side, socially, of the local witches coven and ended up sick for an extended period of time. (I have no proof that these two things are at all connected. They did, however, coincide.) The actual illness was awful but fairly short-lived: the worst part was that I was physically mute for four weeks straight. My job at the time was substitute teaching. I was completely unable to work.

Broke, bored, and unable to communicate in any other way, I started the Patreon. I wrote the First Quarto in record time and edited it furiously while I was stuck in bed. When I wasn’t writing, I was reading up on marketing and trying to wrap my head around how I was going to do this with zero budget. I wouldn’t say it worked spectacularly, but it worked well, so I kept going.

The Quartos (the novellas) came about by popular demand. People wanted to read the stories in paperback. I did two releases: the hard copies on IngramSpark (which I highly recommend) and the ebook version through Amazon. I released the First Quarto in September 2017 and it’s been going ever since.

I admit that part of me wishes I’d waited and queried traditionally: I’m really fond of this series, and with the current hiatus I can’t give it the time and energy it truly needs to shine. But at the same time, I wouldn’t have been able to work with it as freely as I have on my own. The characters are who I want them to be, the plot is what I want it to be, and no one’s going to tell me there’s anything I can’t do.

You released the fourth novella, to quote your Patreon page, “just in time for Pride month,” and LGBTQ+ characters and ideas are at the heart of the story. I’m interested in how you think about representation in SF and YA and beyond, and what your goals and hopes are as readers engage with these stories.

Everyone has their own ways of interacting with the LGBT+ alphabet, so first and foremost I want people to know that I only portray one facet of the experience. I had a fairly easy time of it when I came out as a lesbian, a slightly harder time of it coming out as bisexual, and frankly I’m still somewhat in the closet for a few other parts of my identity (or have come out of the closet in the past, realized I’m woefully unprepared for those conversations, and gone right back in again). I know that my identity isn’t necessarily relevant to my story, but it’s reflected there.

The majority group’s definition unconsciously encourages majority groups to tell minority stories, which is how we end up with scandals like the current American Dirt backlash. If the majority group doesn’t do its research, it usually ends up reinforcing what it already thinks is true, which is often incorrect. Neil Gaiman recently put it really well: “I don’t see the solution to that as being, don’t have anyone in my stories who doesn’t look like me. It’s do it right.”

But I’m part of those minority groups! I have a whole wealth of experiences to draw from: I’m LGBT+ (yes, all at once), I’m Jewish (which means that I’m a person of color in a room full of white people, and a white person in a room full of people of color), and I’m an atheist (which means I get a lot of questions about also being Jewish). There are a number of struggles I could draw from. Yet I don’t.

There are so many coming-out stories and Jewish stories and American stories and non-mainstream religion stories out there, and most of them are more intense than mine. I’ve been fortunate enough to live my life around fairly accepting people—that could always change, of course, but even in my worst nightmares I know my parents won’t disown me, I know my friends won’t try to physically harm me, and I know my housing situation is relatively safe. I’m privileged enough to live a happy and authentic life.

There aren’t enough happily-ever-afters in this world, which—along with not having experienced the worse scenarios—is why those are the stories I want to tell. The ones where the elements of being outside reality’s accepted ideal are present but not constant sources of pain. I’ve got enough conflict and excitement in my books. Gay characters don’t need tragic endings or painful narratives to justify their existence.

My sole exception to this rule is children—not with painful narratives, exactly, but I always try to address their lack of agency in a respectful manner. Kids are historically highly disenfranchised, vulnerable as a population, and repeatedly stripped of their rights, and I was deeply dissatisfied with how that was portrayed when I was a child. I want kids who read my books to come away from them with a greater understanding of their ability to stand up for themselves and their right to be human.

The Hickeys' Irish Pride: St. Pat's Stories from the Kitchen