This is a challenging time for humanity. With staggering inequality among industrialized nations, deteriorating social and economic stability, and ongoing environmental degradation of the planet, it’s easy to be overwhelmed. How can we find effective solutions and move forward?

Before we begin, let’s dive into the simple mechanics of our current economic model to identify the underlying design flaws that have brought us to this point. Then we can examine some compelling theories for progress in the 21st century.

A popular economic tool that is at the root of many political and economic decisions is the Cobb-Douglas production function. This mathematical equation defines labor (employed people) and capital (machines and financial assets) as the key drivers of production. Economists recognize, however, that labor and capital are not equal in their productive capabilities. As we will see, the imbalance between income generated from capital and income generated from labor is a major force behind the widespread inequality we see today. 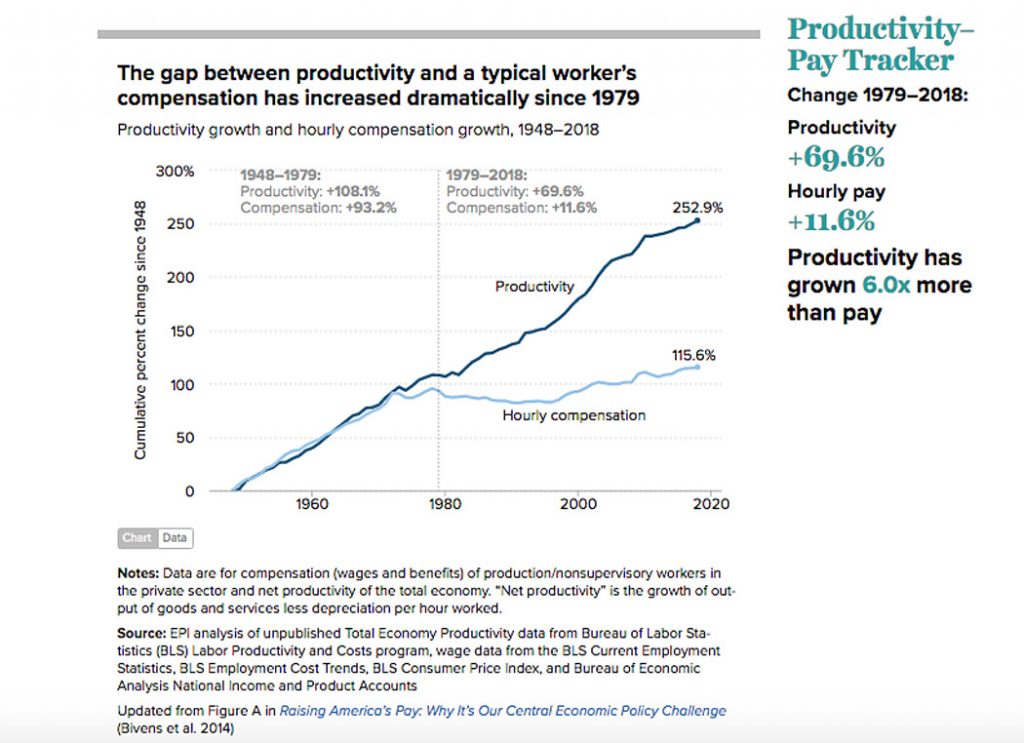 Enter Thomas Piketty, the French economist and author of the international best seller Capital in the Twenty-First Century. In his book, Piketty uses historical data to show how capital ownership has become much more exclusive and lucrative, allowing the richest individuals to amass even greater wealth. To put this into perspective, the richest 0.01 percent make nearly 70 percent of their income from capital ownership alone. Capital itself accounts for nearly one third of our national income, meaning that nearly one third of our nation’s wealth is flowing into the pockets of an increasingly small number of wealthy individuals.

In contrast, while national income from labor has increased steadily over the past decades, wage growth has stagnated. This means that while our workforce has increased in productivity, the fruits of that labor have not been realized by the workers themselves. If we factor in inflation, there has been virtually no increase in wages since the 1970s.

In the great tug-of-war between capital and labor, capital is winning, and we have increasingly seen this unfold right before our eyes. Manufacturing jobs have been lost to machines that can assemble products more efficiently than people. Jobs in transportation are being rapidly mechanized with the advent of self-driving cars. Even highly skilled professions, such as those in the medical field, are being challenged by computers that have been shown to be more accurate in examining charts and providing diagnoses to patients. Some argue that historically the labor force has successfully pivoted to accommodate technological innovation, but artificial intelligence has progressed to the point where AI-driven technology could feasibly do almost everything better than we can—and this will likely happen sooner than we think. Where do people fit into an economic model that maximizes capital efficiency above all else?

This touches on our primary dilemma: how do we navigate an economic system in which our well-being is directly contingent on our productivity, if most human beings no longer have any productive advantage over technology and possess no income-generating capital? By ignoring this question, our economic model is unwittingly producing an expendable and powerless middle class, with low wages and little bargaining power. Without a top-to-bottom redesign, the labor force will only continue to be phased out, as capital becomes the preferred input for production and owners of capital reap the entirety of the rewards. This is the unintended consequence of a short-sighted economic system with misaligned incentives, a great beast that we have lost control of.

Systems already exist that are helping us redesign our debt-based economic growth model. Next month, we will explore modern monetary theory, universal basic income, carbon taxes, and more ways that we can address these challenges.

If we are ever to achieve a sustainable economy, we must stop pretending that maximizing financial returns on capital will protect our broader social and environmental imperatives. By democratizing the programming of our economy, we have the opportunity to intentionally chart a course for a more life-supporting and human-friendly world.

If you would like to partner with TerraCycle Fairfield, email TerraCycleTown@gmail.com.

Nancy Gaub Premieres Concerto During "Symphonic Treasures" on May 15